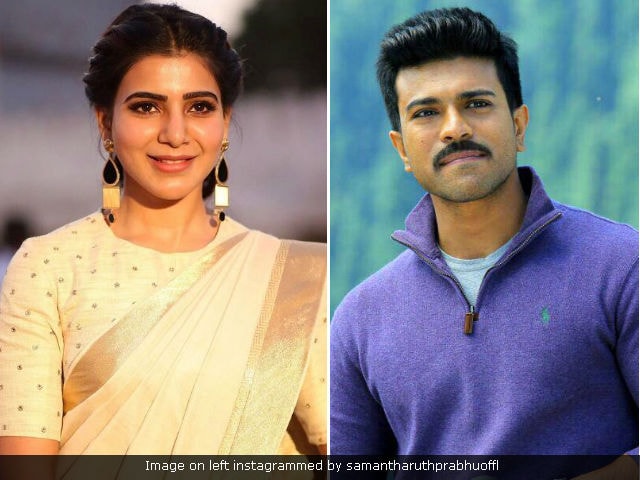 Samantha has not officially signed the dotted line yet (Image courtesy (L): Samantha)

Telugu star Ram Charan Teja's new film may have found a heroine, after actress Anupama Parameswaran was dropped from the project. Samantha Ruth Prabhu may have been cast opposite the 31-year-old actor, according to news agency IANS. Samantha, 29, has not officially signed the dotted line yet. "It's true that the makers have approached her and she's extremely excited about the project. But she hasn't yet officially signed it. As she has two more projects in her kitty, she's figuring out how she can allot dates," a source from the film unit told IANS. The film, which is to be directed by Sukumar, is said to be a rural romantic drama.
The film went on floors on January 30 with a pooja ceremony and the makers also shared a first look poster for the film, reported trade analyst Taran Adarsh.

Last week, actress Anupama Parameswaran told Times Of India that she had no idea why she was no longer doing the film. "I am not part of the Ram Charan film anymore. The formalities for the project were over and that's when I had announced the news via my social media account. However, I recently got a call and was told that I am not part of it. I am not aware of the reason, but it is their discretion," she said.
News headlines speculated she had asked for a pay cheque heftier than producers were willing to pay. However, the filmmakers have rubbished the reports. "This is to clarify that while it is true Anupama is not part of Sukumar-Ram Charan project, it is not correct that on account of high remuneration demanded by her... Such reports are totally false," read a statement. There were also suggestions that Anupama was not considered 'glam' enough for the role.
The film, as yet untitled, will be produced by Mythri Movie Makers and is scheduled to go on the floors next month.
Samantha Ruth Prabhu, who had six film releases last year, got engaged to her longtime boyfriend actor Naga Chaitanya on January 29 in a private ceremony in Hyderabad. The 29-year-old actress announced her engagement on Instagram. The couple have co-starred in three films together- Ye Maaya Chesave, Manam and Autonagar. Samantha and Naga Chaitanya are likely to tie the knot later this year.
Ram Charan Teja recently had a hit as a producer in Khaidi No 150, starring his father Chiranjeevi.
(With IANS inputs)