Santhana Devan, Film On Jallikattu: #SanthanaDevan is trending after a poster of the film was released, showing actor Arya preparing to engage with a flower-decorated bull 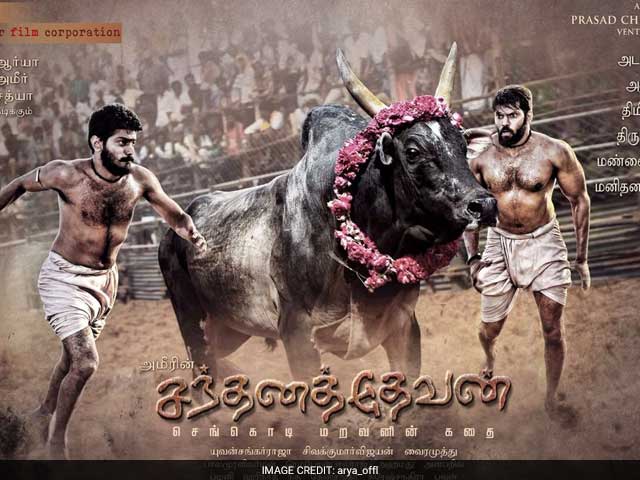 A film about the banned and controversial sport of Jallikattu is among Twitter's top trends today. #SanthanaDevan is trending after a poster of the film was released, showing actor Arya preparing to engage with a flower-decorated bull. Jallikattu, the traditional sport of bull taming popular in Tamil Nadu, has been banned by the Supreme Court for two years now. A petition challenging the ban is pending in the Supreme Court, which has said it will not be able to deliver a verdict on allowing Jallikattu by Saturday, which marks the festival of Pongal. Jallikattu has been endorsed by celebrities like Kamal Haasan, Dhanush and Simbu. Santhana Devan stars Arya, his brother Sathya and actress Satna Titus, and directed by Ameer. Arya tweeted the poster from his account:


Welcome @DirAmeer sir to Twitter Thanks for the great opportunity #SanthanaDevan Shall live up to ur expectations #JallikattuForSurepic.twitter.com/U9MCjlJQ8b

Most tweets on #SanthanaDevan praise Arya's look on the poster, like this one:


You look like a beast @arya_offl in #SanthanaDevan. Wish you all success in upcoming movies. :)

Celebrities have invoked Tamil pride in their support of Jallikattu. Actor and producer Dhanush tweeted earlier this week:


#Jallikattu is an integral element of the voice and identity of Tamilians. #ISupportJallikattu#WeNeedJallikattu#TamilCulture

Actor Simbu and composer Yuvanshankar Raja, who has scored Santhana Devan, have also posted tweets. Actress Khushbu Sundar railed against the ban on Jallikattu in a series of tweets, many in response to PETA India.
At the India Today Conclave a few days ago, Kamal Haasan urged that Jallikattu not be compared to the Spanish bull-fighting. "I am one of the few Kollywood actors who has been a part of Jallikattu. It does not involve winning or harming the bull but more about who can stay with the bull for the longest on the ground," he said, adding that if Jallikattu is considered cruel, then biryani should also be banned.
Jallikattu is traditionally held on the third day of Pongal and it is likely that Tamil Nadu will have to forego the sport this year, the third since Supreme Court pronounced the ban in 2014. Chief Minister O Panneerselvam has, however, promised to ensure that Jallikattu is held.