Kannada actors Yash and Radhika Pandit got married in a lavish ceremony in Bengaluru. They were in a relationship for six years 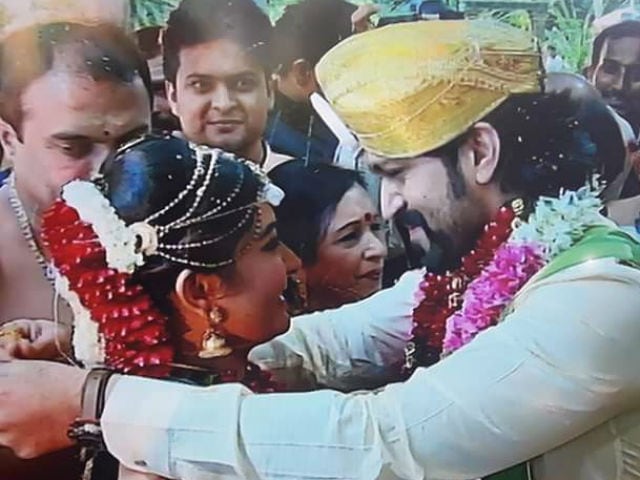 Yash and Radhika photographed during their wedding (Image courtesy: RadhikaPandit )

Kannada stars Yash and Radhika Pandit finally got married in a lavish wedding ceremony on Friday afternoon after six years of courtship. The wedding took place as per the Hindu rituals in a star hotel in Bengaluru. The celebrations kicked off from Monday with mehendi and sangeet and other ceremonies. Yash and Radhika first met on the sets of the television serial Nandagokul and together made their Kannada film debut as a lead couple in the year 2008 with Moggina Manasu. The couple got engaged in Goa on August 12 in a closed ceremony. The wedding was a star-studded affair and was attended by the bigwigs of politics and film fraternity.

The groom wore a silk dhoti while the bride looked gorgeous in the golden sari and gold jewellery.

So far, the couple has together starred in films like Drama, Mr and Mrs Ramachari and Santhu Straight Forward.
The wedding was attended by Karnataka Chief Minister Siddaramaiah, former Prime Minister HD Deve Gowda, actors Ravichandran, Sudeep, Prem and others.
The power couple's wedding festivities begun with a bachelorette party on Sunday, and was later followed by the other ceremonies. Their marriage ceremony has been the most talked-about ceremonies of the year. Also, many pictures of the bride and the groom from the wedding festivities went viral on social media.

Yash, 30, and Radhika, 32, will host a wedding reception for their friends and industry colleagues on Saturday.
On the work front, Yash and Radhika recently appeared in Santhu Straight Forward. Meanwhile, Yash is now preparing for his next big release of 2017 KGF and Radhika's next film will release in 2018.