Shah Rukh Khan: I am a big Rajinikanth fan 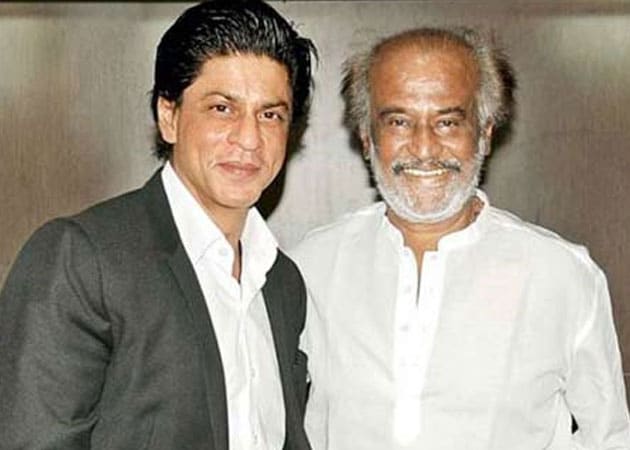 Bollywood superstar Shah Rukh Khan on Sunday said that he is such a big fan of Rajinikanth that he decided to attend the audio launch of his film Kochadaiiyaan.

Bollywood superstar Shah Rukh Khan on Sunday said that he is such a big fan of Rajinikanth that he decided to attend the audio launch of his film Kochadaiiyaan.
"I came here for three reasons. Firstly, like all of you, I am a big Rajinikanth fan," Shah Rukh told reporters at the launch.
Reminiscing his earlier days, SRK said that many years ago when he landed in Mumbai, he went to see the shooting of a Hindi film starring Rajinikanth and learned an important lesson after observing the southern superstar.
"I saw from far away that he was standing in front of a big mirror and practising throwing cigarette in his mouth.
"There were a lot of actors minding their own business, but Rajini sir kept on practising. He was getting it right like he does every time in the film, but he kept practising. That's one of my learning lessons of my life because someone of his talent and stature keeps on working so hard," he said.
The second main reason is friendship, said SRK.
"I was in need of a lot of help during the making of Ra One, and I would like to thank Rajini sir, Soundarya and Lata ma'am for helping me out overnight. I have come as a friend because whenever I came to Chennai or Tamil Nadu, all of you have given me so much of love," he added.
Talking about the third reason, SRK said: "I came here as a seeker of knowledge because the films made here actually make our country the proudest. The films by K. Balachander sir, Shankar sir and so many others have taught so much in cinema."
Shah Rukh, who recently paid tribute to Rajinikanth through the song Lungi Dance in Chennai Express, crooned a few lines of the song on stage for the superstar.
The film has been directed by Rajinikanth's daughter Soundarya. SRK said he is excited about Kochadaiiyaan as it has been made using motion capture photo-realistic technology.
"I was extremely excited when four years ago Soundarya talked about her ambitious project because this is going to change cinema in this country. I believe this technology is going to be one of the finest steps in Indian film industry," he said.
Also starring Jackie Shroff, Shobana, R. Sarathkumar, Aadi Pinisetty, Nasser and Rukmini, Kochadaiiyaan will release April 11 worldwide.