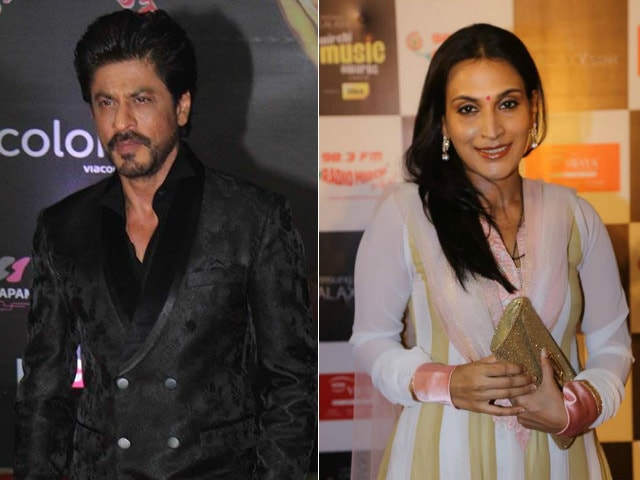 We are not sure if Shah Rukh Khan partied on New Year's eve but he definitely spent some time on Twitter as he shared the first look of the next film to be helmed by Rajinikanth's daughter Aishwaryaa. The 35-year-old filmmaker will occupy the director's chair yet again for a biopic on high jumper Mariyappan Thangavelu, who won gold for India at 2016's Summer Paralympic games, which took place in Rio de Janeiro. "Here's presenting the first look of the biopic on Mariyappan Thangavelu, our very own national hero," wrote Shah Rukh when he tweeted the first poster on Saturday.
The biopic is titled after the high jumper - Mariyappan and is scheduled to hit screens sometime this year. However, the poster doesn't reveal the date of release. The poster features the fictional version of Mariyappan Thangavelu, who fetched gold for India at the Summer Paralympic games for the first time since 2004. The first look features the back side of a reel-life Mariyappan in a mud-stained jersey - he holds his gold medal in one hand and is juxtaposed against a stadium. Aishwaryaa's Mariyappan will release in both Hindi and English, reveals the poster.
Shah Rukh Khan wished the very best to Aishwaryaa:


Here's presenting the first look of the biopic on #MariyappanThangavelu, our very own national hero, all the best @ash_r_dhanushpic.twitter.com/oD1avhkC4K

This is how Aishwaryaa responded to Shah Rukh Khan's tweet:


Thank you so much ! A very happy new year to you and the family. Xx https://t.co/dXJ4LshsG2

Aishwaryaa, the daughter of megastar Rajinikanth, is married to South superstar Dhanush and has many titles added to her resume. Aishwaryaa was appointed as the United Nations women's advocate for gender equality earlier this year and also released her memoir Standing On An Apple Box. Talking to NDTV, she revealed the reason behind publishing her memoire - she wrote the she wanted to simplify the ideas surrounding star children. Aishwaryaa has previously directed 3 and Vai Raja Vai. Aishwaryaa made her debut as director with 2012's Tamil thriller 3 starring husband Dhanush.
Meanwhile, Shah Rukh was last seen in 2016's Dear Zindagi and has Raees up for release on January 25. Raees stars Shah Rukh as a drug baron and will clash with Hrithik Roshan's Kaabil at the box office.