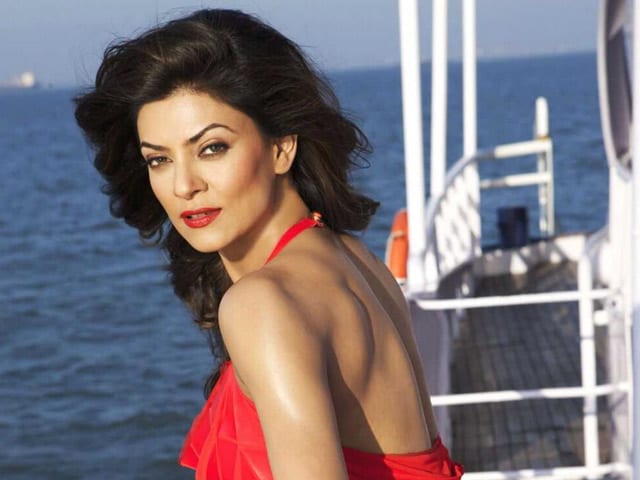 This image was posted on Twitter by Sushmita Sen

Sushmita said that her father always wanted her to act in Bengali films, something which never worked out for her

Bollywood actress and former Miss Universe Sushmita Sen said that she has, once again, made her father proud and this time by acting in a Bengali film.
"It was my father's big dream that I do a Bengali film. It is a big moment for him," said Sushmita, whose debut Bengali film Nirbaak (Speechless) will release on May 1.
The 39-year-old actress, who has starred in Hindi films like No Problem, Main Hoon Na and Biwi No 1, said her father Shuber Sen always wanted her to act in Bengali films, something which never worked out for her.
"He was very ecstatic when he heard that. He had watched Srijit Mukherjee's (director) films before and said he is a fantastic director and you must do his film," she said.
Although born to Bengali parents in Hyderabad, the actress was worried about her command over the language while dubbing for the film.
"I was scared whether I would be able to express myself in Bengali. The director made me do the dubbing like I was a child doing poetry recitation. He said every word has to be said exactly like a true Bengali," she said. (Also Read: Nirbaak Needed Woman of Substance Like Sushmita Sen, Says Director)
Two-three years ago, she was in talks with the late maverick Bengali film director Rituparno Ghosh for a Bengali movie.
"We were discussing a film but he left us before that happened. That was a film I would have done for sure. I will regret that. As a human being and as a director, both, he was honest, my kind of a person," the actress said.
She is now discussing a project with another Bengali filmmaker Anjan Dutt.
Describing the film Nirbaak as a simple and silent storytelling, Sushmita said it is not the kind of film where people will rush to do advance booking.
"This is the kind of film which paves the way for future generations of filmmakers who want to tell a story differently and use everything other than dialogue, song and dance and tell a story in silence. I am hoping that we all will be a part of the cinema that would be studied by future generations," she said.
The script of the film given to her was so complicated that she could barely figure out the story.
"Usually I read some scripts and then say I didn't understand this particular part. But after reading this script it was a big question mark at the end. I couldn't understand the whole script. Later on, I understood that I need to forget what's written here. It is what is not written here," the actress recalled.
Comparing Bollywood with the Bengali film industry, she said with small budgets they don't have the luxury to make mistakes. "We had planned for 22 days and it ended on time and within the budget," Sushmita said.