"I was very happy to know that Vikram was a part of it," said Tamannaah Bhatia 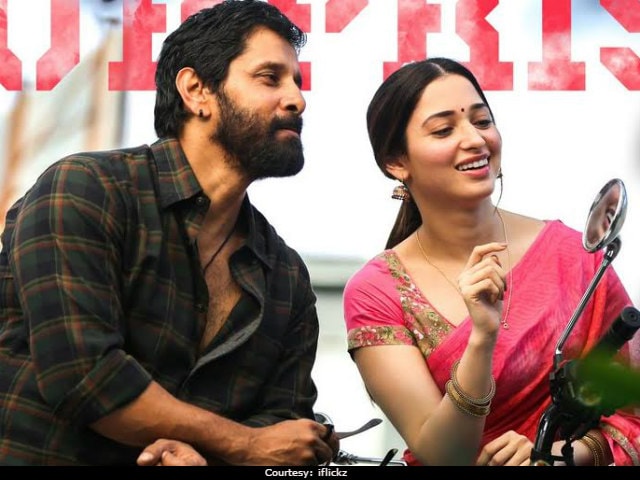 Tamannaah stars with Vikram for the first time (courtesy: iflickz )

Actress Tamannaah Bhatia seems to be enjoying her successful stint, shooting for her next Tamil film, titled Sketch. The film has turned to be a double whammy for her. Not only is she is cast opposite one of Tamil Cinema's most versatile heroes, Chiyaan Vikram, but she's also got a meaty role that will showcase a different side of her. In a conversation, the actor tells us why it's so fulfilling to work with a hero she's always admired. Tamannaah Bhatia has also famously starred in SS Rajamouli's magnum opus, the two part epic drama Baahubali, the second part of which will hit screens on April 28.
De-glam look for Sketch
The first schedule of Sketch has just been completed recently. The lyric video of one song, titled Kanave Kanvae, has just been released, taking social media by storm, on Chiyaan Vikram's birthday on April 17. We ask Tamannaah about the buzz around her fresh pairing with Vikram and she reveals, "Vikram and I have met before and for were supposed to work together for several projects in the past. But nothing materialized, until now. When director Vijay Chander brought this script of Sketch to me, I was very happy to know that Vikram was a part of it. His films are commercial but also have a sense of realism and believability in them. In addition, my role is that of a very realistic character, someone who people would relate to. I am seen in a sari, with a plait and not much make up. So far, I've been enjoying every bit of the portions we've shot."
Exploring a different side of herself, is giving Tamannaah a new high. She elaborates, "After acting in Dharmadurai (Tamil), I've wanted to play roles which are meaningful and real. I've just finished shoot for producer Vashu Bhagnani's Hindi thriller starring Prabhu Deva, where I play a deaf and mute girl. I now want to choose roles which offer new perspectives and take me into unpredictable spaces. I want to unlearn my past errors and want to change many of the things I have done. But of course, changes can't be made in retrospect. So I want to make film choices that enhance my learning curve from now on."
And that is perhaps why, working with Chiyaan Vikram is turning out to be so fulfilling for her at this stage of her career. "I always thought I work very hard. But Vikram just re-defines the term hard work. I've been a huge admirer of his efforts for his metamorphosis into those characters in director Shankar's film I. Now when I am working with him, I can't help but admire him up close at work. The way he juggles so many things at the same time is amazing. He not only shoots long hours, but also finds time to work out. He is completely alert, on the job at all times on sets. At the same time, he's relaxed, chilled out and a lot of fun too. We both are movie buffs. So between shots, we have deep, meaningful conversations on cinema. Apart from discussing the films we've watched, it's great to discuss my own films with him. Even being able to share viewpoints on how we both approach a scene, are both a learning process and a fulfilling experience for me as an actor."