Tamannaah Bhatia takes Kangana Ranaut's role in the Tamil remake of Queen. "What makes the film special is that it's one of those rare women-centric films which succeeded in reaching out to everybody, across all sections of the audience," she says 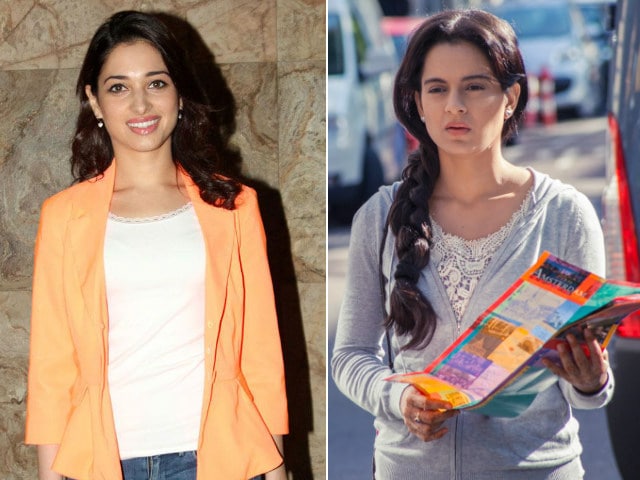 Tamannaah Bhatia and a still from Queen

Bollywood, take note, for Tamil cinema has a new Queen in the form of Tamannaah Bhatia. Rani from Rajouri is heading South and Tamannaah, 26, has been zeroed in on to play the much-admired role, filling in Kangana Ranaut's shoes. Kangana's performance as the title character in Vikas Bahl's 2014 blockbuster Queen fetched her the National Award for Best Actress. Kangana featured as a simple Delhi girl from a typical Punjabi family. Rejected by her fiance on the day of their wedding, Rani embarks on and completes her pre-planned honeymoon itinerary all alone. Rani's solo trip turns out to be a journey of self-discovery. Tamannaah confirmed that she had been cast in the South remake and told deccanchronicle.com "I've signed the film, but we are still to lock in the dates. As far as I know, this project will start rolling in 2017." Amy Jackson has reportedly been cast as Rani's friend, the role originally played by Lisa Haydon.
In an interview with Mumbai Mirror , Tamannaah reveals what makes working in the Tamil remake special for her: "Ever since I saw Queen, I wanted to be a part of its remake. What makes the film special is that it's one of those rare women-centric films which succeeded in reaching out to everybody, across all sections of the audience," she told Mumbai Mirror .
Tamil filmmaker Bhagyaraj, who acquired the rights for the Southern versions of Queen, announced the respective directors who will helm the Telugu, Tamil and Malayalam remakes. gulte.com reported Bhagyaraj as saying: "Anish Kuruvilla for Telugu, Revathi for Tamil and Malayalam and Prakash Raj for Kannada remakes have been signed as directors."
Tamannaah also said that she is impatient to start working on Queen. "I felt liberated when I saw Queen, and I can't wait to start working on the remake. The fact that Revathi ma'am is directing it makes it even more special," she told Mumbai Mirror .
Cine-goers will also see Amala Paul and Parul Yadav will step into Kangana's shoes for the Malayalam and Kannada remakes respectively. "Tamannaah for Tamil, Amala Paul for Malayalam and Parul Yadav for Kannada versions have been finalized but no actress for the Telugu version has been zeroed in yet," Bhagyaraj told gulte.com.
About her own film, Tamannaah added: "I think it's going to be a great combination. More than a remake, this will be treated as an adaptation as a lot of things have to be changed to suit Tamil sensibilities."
Released on March 7, 2014, Queen was director Vikas Bahl's second movie. Queen co-starred Rajkummar Rao as Rani's errant fiance, Vijay.