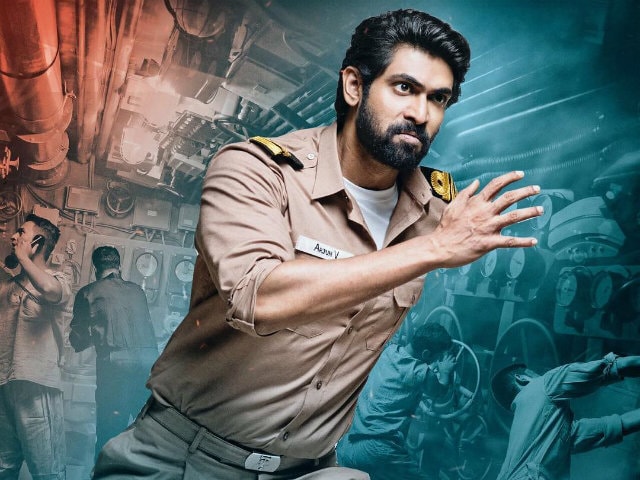 The Ghazi Attack Box Office Collection: Rana Daggubati in a poster of the film

Rana Daggubati's new film The Ghazi Attack scored a sum of Rs 19.40 crores, including the box office collections of its fourth day run at the theatres, reported trade analyst Taran Adarsh. The Hindi version of Rana Daggubati's film continues to perform consistently on Monday, Mr Adarsh reported. "The Ghazi Attack remains steady on Monday," he tweeted and also added that the Hindi version has collected a total of Rs 8.25 crores. The Hindi version of the war movie recorded collection figures of Rs 4.25 crores on Friday, Rs 5.25 crores on Saturday, Rs 6.25 crores on Sunday and Rs 3.65 crores on Monday. The Ghazi Attack is India's first underwater war drama and released in Hindi, Telugu and Tamil on February 17.
Taran Adarsh provided a day-wise break-up of the box office collections of the film. This is what he tweeted on Tuesday:

Directed by Sankalp Reddy, The Ghazi Attack has been well-received by the audience and critics alike. In his review for NDTV Movies, Saibal Chatterjee writes: "One might be taken up a bit with the obvious novelty of the genre - The Ghazi Attack is India's first underwater war film. However, the fierce conflict off the coast of Vizag is reduced to simple us-and-them binaries".
The Ghazi Attack released alongside Running Shaadi and Arshad Warsi's Irada. Taapsee Pannu, who features as a Bangadeshi refugee in Rana's film, stars as a quirky wedding planner in Running Shaadi. The Ghazi Attack marked the Baahubali actor's first film after Tamil movie Bangalore Naatkal. Rana Daggubati will reprise his role as antagonist Bhallala Deva in SS Rajamoul'is upcoming magnum opus Baahubali: The Conclusion, which is scheduled for April this year.