Naga Chaitanya And Samantha Ruth Prabhu Will Get Engaged On... 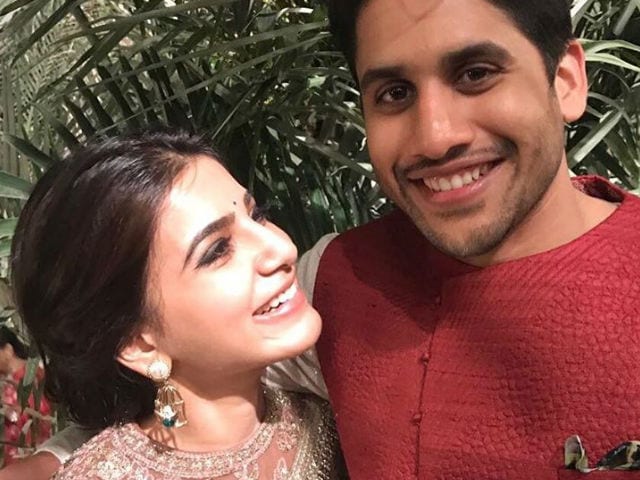 Naga Chaitanya and Samantha have co-starred in four films. (Image by samantharuthprabhuoffl)

Actor couple Naga Chaitanya and Samantha Ruth Prabhu are all set to get engaged next year in January, reports Deccan Chronicle. Recently, Naga Chaitanya's younger brother Akhil Akkineni got engaged to designer Shriya Bhupal in an elaborate ceremony in Hyderabad. And now, Naga Chaitanya, son of actor Nagarjuna Akkineni, will get engaged on January 29, a source told Deccan Chronicle. Naga Chaitanya and Samantha's engagement ceremony will reportedly be as elaborate as Akhil and Shriya's do which took place on December 8. At, Akhil and Shriya's engagement only family and close friends were invited and Samantha was one of them.
"Nag has been busy getting things ready for the engagement. An official announcement about engagement will be made soon," a source told Deccan Chronicle. "Akhil's engagement was a huge affair and Chay's engagement will be no different. In fact, just like Akhil, Chay too could have a destination wedding," the source added. Akhil and Shriya are reportedly planning a destination wedding in Italy and have apparently been scouting locations in the picturesque European country with a swanky option in Rome to be most likely the one.


A photo posted by Samantha Ruth Prabhu (@samantharuthprabhuoffl) on Dec 9, 2016 at 8:04pm PST

In an earlier interview to news agency IANS, Naga Chaitanya opened up his relationship with Samantha and her career options after marriage. "I'm a very private person and I never felt the need to speak about my relationship in public. My friends have known about it for a long time. Then, when we informed our families, they supported our decision. We plan to get married next year," he told IANS.
Samantha, he said, will continue working after marriage. Naga Chaitanya said he won't stop Samantha from acting after marriage. "I don't think I'd ever tell her what she should and shouldn't do. I'm proud of her growth as an actress and I will encourage her to continue working. It was through sheer talent and hard work she got where she is today. I don't think she should throw away her successful career because of marriage," he said.
Naga Chaitanya and Samantha Ruth Prabhu first featured together in 2010 film Ye Maaya Chesave. In 2014, three of their film released back-to-back - Autonagar Surya, Manam and Thrayam.