Karthi plays a fighter pilot in Mani Ratnam's Kaatru Veliyidai. He said, "The way Mani sir shows his characters and especially their romance, it certainly makes everyone yearn to be in those lovers' shoes" 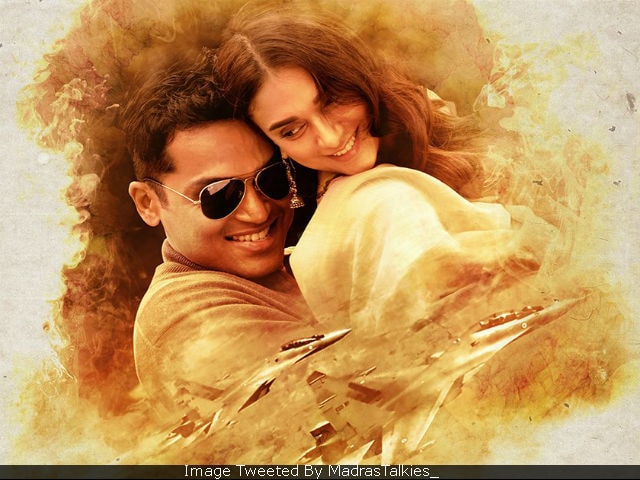 Ace maverick Mani Ratnam is famed for the magic he weaves into his depiction of romance on screen. Going by the song teasers of Azhagiye and the Valentine's Day release Vaan, from Kaatru Veliyidai, it's clear that the magic is intact. We catch up with the film's hero Karthi, who plays a dashing, very much in love, fighter pilot, for a behind-the-scenes peek into how Mani Ratnam brings alive the romance on screen. The teaser of Azhagiye set to A R Rahman's music and visuals by Ravi Varman had already mesmerised social media. Now with Vaan releasing on the eve of Valentine's Day, Mani's fans are ecstatic.
An ethereal Aditi Rao Hydari with a dashing, clean shaven, handsome Karthi, romancing in the snow, have made every youngster long for the joys of being in love. Karthi, has been Mr Ratnam's fan, his assistant director and is now his lead actor. From admiring Mani's myriad portrayals of love as a fan, to actually bringing that love to life on screen, how challenging was it? Says Karthi, "The way Mani sir shows his characters and especially their romance, it certainly makes everyone yearn to be in those lovers' shoes. For me, personally the biggest challenge was to play someone so totally unlike me. To become him was not easy at all. In the beginning, I was not convinced I could pull it off. It was only thanks to a 25-day preparation that I was able to get into the head of the character, understand him and feel and think like him."
Magic in making
The preparation Karthi did involve long discussions, reading sessions and rehearsals with Mani Ratnam. "He actually directs a scene after in-depth discussions with his actors. He makes us discuss how the character should behave. His understanding of relationships is totally different and deeply profound. When you normally read a scene, you visualise it in a certain way in your head like when you read a book. But when Mani Ratnam explains it to you on sets, it becomes something else entirely. He has a deep understanding of the complexities of relationships between two people. He tells you what their differences are and what attracts them to each other and what brings them together. As an actor, you are amazed at the different perspectives he presents before you. He gave me a totally different way of looking at things which is how the romance you see in the song teasers, looks so vibrant and alive," discloses Karthi.
The actor believes teamwork is another important factor, "The way cameraman Ravi Varman lit up the scenes, his close ups and camera movements, along with A R Rahman's music and the lyrics have created the ethereal effect on screen. The rehearsals we did with the choreographers add to the overall effect. Such magic that inspires is created by the harmony of all crafts coming together. It's the way Mani sir stages every scene with his team, that makes the viewer long to live and love in the same way."