A celebrity PR company shared an image of Varalaxmi with '#VaralaxmiGotKidnapped,' as caption 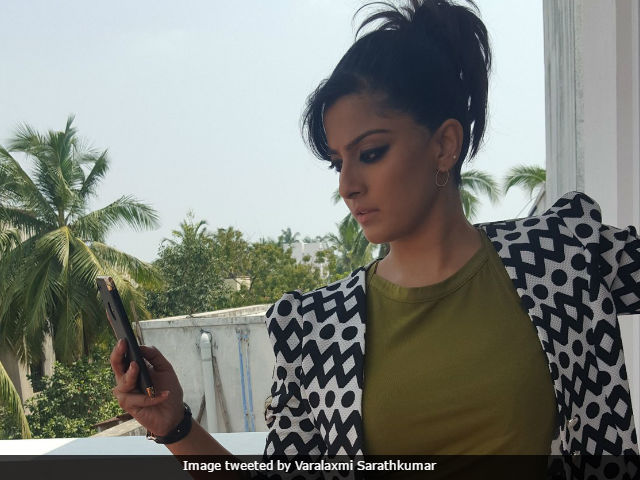 Varalaxmi Sarathkumar was in Delhi when the trend started. (Image courtesy: Varalaxmi)

Actress Varalaxmi Sarathkumar is back on the trends chart. The actress made headlines after a promotional campaign of one of her upcoming films went viral. Nikkil, owner of a celebrity management company, tweeted a black and white picture (as if from a display monitor) of a gagged Varalaxmi tied to a cot and captioned it: "#VaralaxmiGotKidnapped." The picture instantly went viral but before things could get out of hand, the actress assured her fans on Twitter that she is fine. "I'm absolutely fine.. thank u for ur concern.. it's a part of our movie promotion.. announcement at 6pm..!! (sic)." In a separate tweet, Varalaxmi mentioned that she had no idea about the campaign and Nikkil corroborated.
This tweet started the confusion:


I'm absolutely fine.. thank u for ur concern..it's a part of our movie promotion.. announcement at 6pm..!!


Sweet surprise to @varusarath for her movie promotions...she wasn't aware of this..
All is well and always well for @varusarath

Varalaxmi is currently in New Delhi for some work related to her Save Shakti campaign, which she formed after she was allegedly harassed by a TV boss this year in March. Varalaxmi visited the law ministry to represent the petition of Save Shakti, which aims to protect female artistes in the entertainment industry against exploitation.
Varalaxmi started her silver screen career with 2012 film Podaa Podi for which she won several awards. Two years later she featured in Kannada film Maanikya. In 2016, she was seen in two films - Tharai Thappattai and Kasaba. Varalaxmi recently walked out of Malayalam filmAakasha Mittayee after she did not get along with the producers and called their way of working "crass." Her work-in-progress films are Nibunan, Ammayi and Sathya.