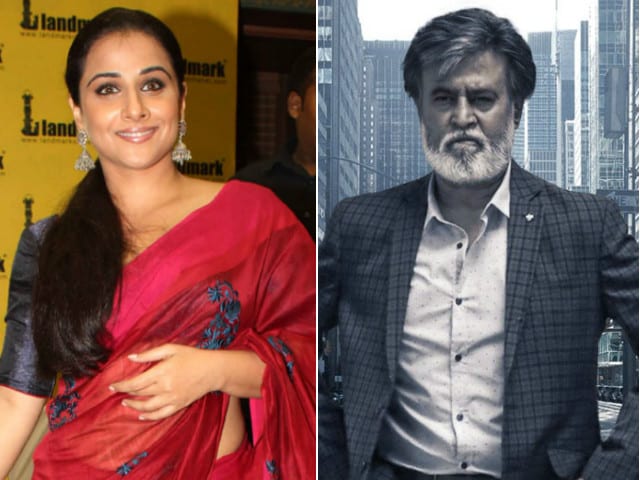 Actress Vidya Balan began rising up the list of trends on Tuesday evening after reports stating that the 38-year-old actress will co-star with Rajinikanth started doing rounds on the internet. The Hamari Adhuri Kahani actress will reportedly headline a spin-off of Rajinikanth's last Tamil gangster drama Kabali, which gained the status of a blockbuster within a brief while. It is also being reported that Rajinikanth's next will be a movie produced by his son-in-law Dhanush while Pa Ranjith, will write for and helm the project. Vidya Balan was last seen as Durga Rani Singh in Sujoy Ghosh's thriller Kahaani 2: Durga Rani Singh. Dhanush is married to Rajinikanth's filmmaker daughter Aishwaryaa.
The makers of Rajinikanth's next film have also reportedly approached Vidya for co-starring with the superstar and as per some reports, Vidya is already on board. Ahead of Kabali, Vidya was rumoured to have been cast opposite Rajinikanth but this is the first time Vidya will star opposite the Lingaa actor. On the other hand, the yet-untitled film is Rajinikanth's second collaboration with Pa Ranjith after the superhit Kabali.
Vidya Balan and Rajinikanth's film will reportedly start shooting in May, once Rajinikanth wraps the shooting schedule of 2.0, which casts actor Akshay Kumar as the main antagonist. Rajinikanth's untitled film, which is reported to be in its pre-production stage, will expectedly be set in Mumbai.
Meanwhile, Vidya has films like Srijit Mukherjee's Begum Jaan and Tumhari Sulu lined up for release. Rajinikanth is busy with the remaining portions of 2.0, the sequel to 2010 robot film Enthiran. Directed by S Shankar, 2.0 is scheduled for October this year.