R Madhavan features as an intense cop in Vikram Vedha, a crime thriller. The teaser gives us a glimpse of the rivalry between Madhavan andVijay Sethupathi, who plays a gangster 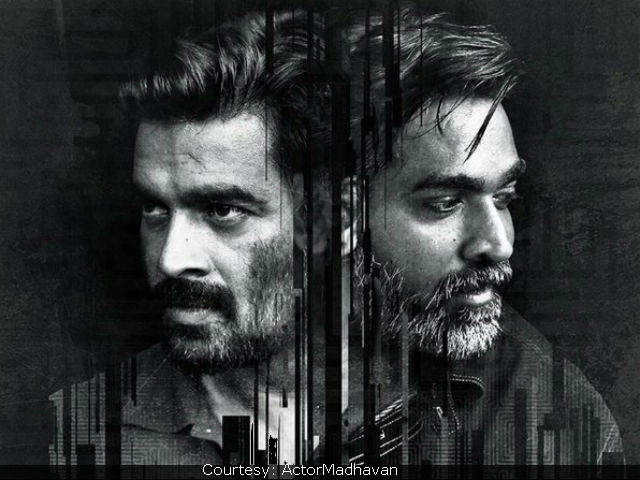 R Madhavan and Vijay Sethupathi in a poster of the film (Courtesy: ActorMadhavan)

The teaser of R Madhavan's much-anticipated film Vikram Vedha was released on Thursday. Madhavan shared the fifty-second long promo video on Twitter and asked the viewers to give their feedback about it. He wrote: "What do you all think?" Going by the teaser, the crime thriller seems to be intriguing as Madhavan, an intense cop and Vijay Sethupathi, a gangster are all set for an iconic clash. The teaser gives us a glimpse of the rivalry between Madhavan and Vijay. Also starring Shraddha Srinath and Varalaxmi Sarath Kumar, the film is being produced by S Sashikanth and is directed by Pushkar and his wife, Gayathri. Vikram Vedha will release in April.
Here's what R Madhavan, 46, tweeted:


Okay FOLKS HERE IT IS ... THE TEASER OF VIKRAM VEDHA @VikramVedhaFilmhttps://t.co/qv8TTgfSOI. What do you all think??? pic.twitter.com/EEeLAbMKMF

Watch the trailer of Vikram Vedha:


@VikramVedhaFilm First look poster folks. I am so excited. pic.twitter.com/2Zd8unhIfK