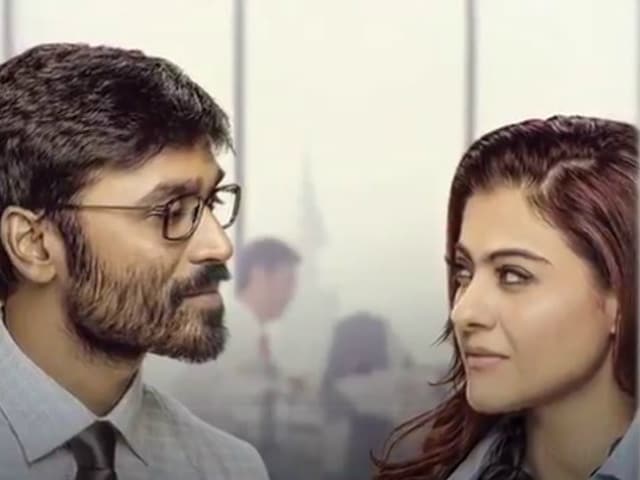 VIP 2: Dhanush and Kajol in a still from the motion poster (courtesy: dhanushkraja )

'#RaghuvaranIsBack,' is one of the top trends on Twitter today and credit goes to the sequel of Velaiyilla Pattathari, starring South star Dhanush and Kajol. Dhanush reprises his role as protagonist - Raghuvaran - while Kajol will reportedly feature as the antagonist in the Tamil drama. On Wednesday, Dhanush tweeted a motion poster of sorts featuring himself as Raghuvaran and Kajol's onscreen persona. Dhanush also explained what makes it special - "VIP 2 first day shoot in year 2017," he captioned. Dhanush, kicked off the sequel of his 2014 blockbuster film Velaiyilla Pattathari, popularly known as VIP, with the blessing of none other than Rajinikanth on December 15.
Dhanush and Kajol, both office-ready, seem to be part of a face-off of sorts in the poster. Dhanush and Kajol will share screen space for the first time. With VIP 2, Kajol is making a comeback to Tamil films after two decades. Kajol's first Tamil movie was Rajiv Menon's 1997 film Minsara Kanavu - a romance which also starred Arvind Swamy. Here's Dhanush and Kajol in one frame.

In an interview to news agency PTI, Kajol said, "I am a little apprehensive. But I love the fact that I am going back to Tamil cinema."
Meanwhile, director Soundarya shared New Year gifts - posters featuring Kajol and Dhanush. "As the year comes to an end and a #NewYear begins, here's my gift to all," she wrote when she tweeted the pictures:


As the year comes to an end and a #NewYear begins ...here's my gift to all #Dhanush fans #VIP2#FirstLookPosters#TeaKadaiRajasAreBack #2017 pic.twitter.com/bgdArWurhg

In VIP, Dhanush played a character who portrayed the transition from an unemployed graduate to a successful civil engineer. In the teaser released in early November, only a silhouetted Dhanush was featured against a sketchy construction site.

Directed by Rajinikanth's daughter Soundarya, VIP 2 releases in both Tamil and Telugu. Dhanush is married to Rajinikanth's elder daughter Aishwaryaa R Dhanush, who directed him in 2012 Tamil film 3. VIP 2 will be produced by Dhanush's Wunderbar films.