Viral: When Baahubali Prabhas And Superstar Chiranjeevi Met Like A Boss

Chiranjeevi, who is currently shooting for Khaidi No. 150 met actor Prabhas and filmmaker SS Rajamouli, both of whom are now awaiting the release of Baahubali: The Conclusion. Expectedly, the picture went viral quickly on social media 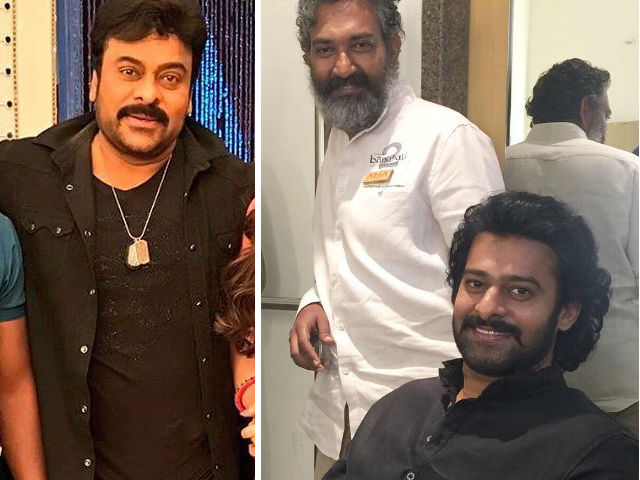 If there are two of the biggest entities in Telugu cinema today, they're superstar Chiranjeevi and the bilingual two-part Baahubali saga. So imagine our excitement when the two met.
Chiranjeevi, who is currently shooting for his milestone 150th film Khaidi No. 150 after a gap of nine years, met actor Prabhas and filmmaker SS Rajamouli, both of whom are now awaiting the release of perhaps the biggest movie sequel in Indian cinema history, Baahubali: The Conclusion. Expectedly, the picture went viral quickly on social media.
But before your mind starts churning, this was not as work-related as we'd hoped. Apparently, the shooting of Khaidi No. 150 was in close proximity to the whereabouts of the actor-director duo. When Rajamouli and Prabhas heard that Chiranjeevi, Rajya Sabha MP, was nearby, they went to wish him luck and success on this endeavor.
According to bystanders, as reported by International Business Times, Chiranjeevi too asked about Baahubali and wished the team all the best. Additionally, he wished Prabhas in advance for the actor's birthday which falls today.

An official remake of Vijay's Tamil film Kaththi, Khaidi No. 150 is being bankrolled by Chiranjeevi's son, actor Ram Charan. And the actor-producer posted this now viral image via the official handle of his production company Konidela Pictures. He captioned it "#KhaidiNo150 with the people of Mahishmathi!" referring to the fictional historical location where Baahubali is set. In the picture, Prabhas and Chiranjeevi are seen in a respectful embrace as Rajamouli looks on.
Chiranjeevi will soon fly from Hyderabad to Ukraine to finish the outdoor schedule of his film.
Meanwhile, the first look motion poster and still for Baahubali: The Conclusion starring Prabhas was released late Saturday night. The film, which releases April 28, 2017, is touted to have a massive opening at the box office. It also stars Anushka Shetty, Tamannaah Bhatia and Rana Daggubati.