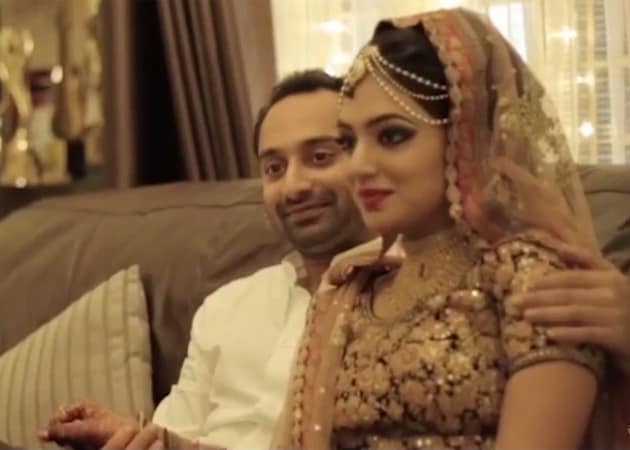 A still from the trailer of Fahadh and Nazriya's wedding video

They are an absolute delight to watch when they are singing and dancing in front of the camera, because they are naturals.

So what happens when the son of a famous Malayali filmmaker, who also happens to be an actor, decides to get married to a colleague? Fanfare, food and a fancy wedding video. Many have gone down this road before; this couple is not the first one to do something like this. So what is so special about actors Fahadh Faasil and Nazriya Nazim's wedding movie?
A) They are an absolute delight to watch when they are singing and dancing in front of the camera, because they are naturals.
B) The fact that both of them are really cute, which adds to the video's glamour quotient.
C) It features many celebs from film industry including Dulquer Salman, Arya, Priyadarshan, Meera Nandan, Kavya Madhavan, Anjali Menon, Shaji Kailas and Suresh Gopi.
Made by wedding filmmakers, Maritus Weddings, the video was shot during an intimate ceremony held on the outskirts of Thiruvananthapuram last week amid a few relatives, family friends of the couple, along with a few bigwigs from the film industry and politics. While Fahadh made his acting debut in the year 2002 in a movie directed by his father, Nazriya started out as a child actor in 2006 and has since played leading lady in a few films after a stint as a TV anchor. Both of them are a match well made. The video only reaffirms that.
Watch the trailer: