What Are Baahubali's Sivagami And Katappa Doing In This Advert Going Viral?

Sathyaraj and Ramya Krishnan star as a royal couple in the advert - which is half-reminiscent of Baahubali - Katappa is the loyal servant to Sivagami, the queen of Mahishmathi 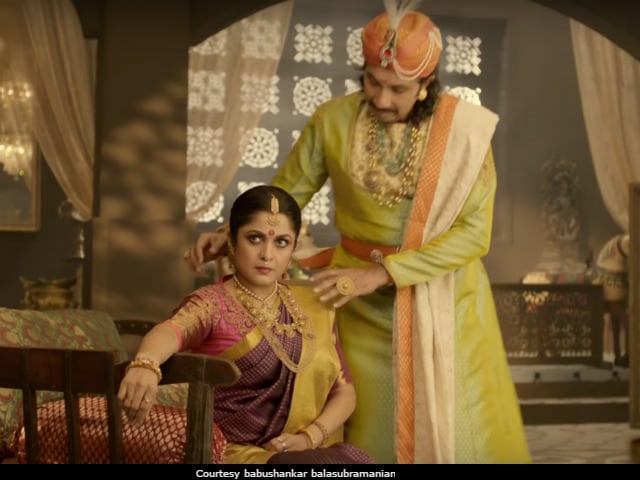 Baahubali stars in a still from the advert (courtesy You Tube)

Well no, it's not a snippet of Baahubali 2. It's neither a new promo nor a behind-the-scene video of the film. It's a new advert for a clothing brand which features Baahubali co-stars Ramya Krishnan and Sathyaraj - the actors who play the Rajmata of Mahishmathi, Sivagami, and senapati Katappa in S S Rajamouli's two-part epic drama. Sathyaraj and Ramya Krishnan star as a royal couple in the advert - which is half-reminiscent of Baahubali - Katappa is the loyal servant to Sivagami, the queen of Mahishmathi. While the beginning of the advert might make Baahubali fans a little uncomfortable, the beautifully animated conversation between the two will have you glued to the screen.
The advert appears to document a conversation between the queen and the king, who discuss the state of their kingdom - and how to better it. Ramya Krishna, who is almost, similarly dressed as her character from Baahubali, appears upset towards the beginning of the advert but cheers up once Sathyaraj comes up with a novel idea for their kingdom.
The re-appearance of the Baahubali stars in different personas have indeed delighted a section of Baahubali fans while the apparel brand's release of the advert at this time can only be termed strategic. Baahubali 2 is raking in crores at the box office, scoring over Rs 1000 crores in a little over a week.
Watch the advert here:

Baahubali 2 also reunites the original cast of the first part with Rana Daggubati, Tamannaah Bhatia, Anushka Shetty, Ramya Krishnan and Sathyaraj reprising their roles. Baahubali 2 releasesd across 8,000 screens and in five languages on April 28 in India.