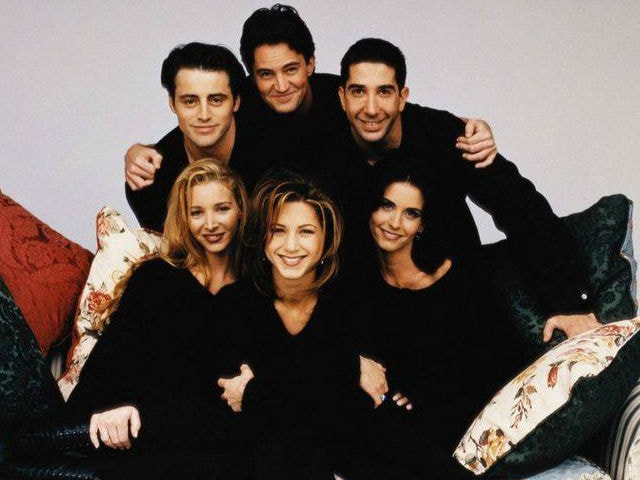 The cast of F.R.I.E.N.D.S (minus Matthew Perry) did reunite to celebrate and honour the show's director James Burrows. F.R.I.E.N.D.S team posted with The Big Bang Theory actors and Kaley Cuoco Instagrammed the moment. They collaborated to shoot NBC's special tribute to Mr Burrows

It was the one where they sang I'll Be There For You for James Burrows.
The cast of F.R.I.E.N.D.S (minus Matthew Perry) did reunite to celebrate and honour the show's director James Burrows on Monday. Actors Jennifer Aniston, Courteney Cox, Lisa Kudrow, David Schwimmer and Matt LeBlanc posed with the cast of Mr Burrows' other hit show The Big Bang Theory.
Actress Kaley Cuoco, Penny Hofstadter of The Big Bang Theory, Instagrammed the moment:

Matthew Perry is rehearsing a play in London and was unable to appear.
Team The Big Bang Theory was also represented by actors Jim Parson, Johnny Galecki and Simon Helberg.
They collaborated to shoot NBC's special tribute to Mr Burrows, which will aired in February. The cast of Mr Burrows' other comedy shows - Cheers, Frasier and Will & Grace - also filmed the special. (Also Read: F.R.I.E.N.D.S Co-Creator Says There Will 'Never' be a Movie )
Actor Sean Hayes, of Will & Grace, tweeted a pic with his co-stars Eric McCormack and Megan Mullally:

James Burrows, who recently directed his 1,000th TV episode, helmed the pilot episode of F.R.I.E.N.D.S, which ran for 11 years.
Early rumours that the F.R.I.E.N.D.S cast would reunite for a special episode were shot down by the sitcom's co-creator Marta Kauffman, who told Variety magazine: "Why? I mean, for me, why go back to that territory? I get to do what I loved about F.R.I.E.N.D.S, which is make a show that's got some hope and joy to it, and explore something completely new."