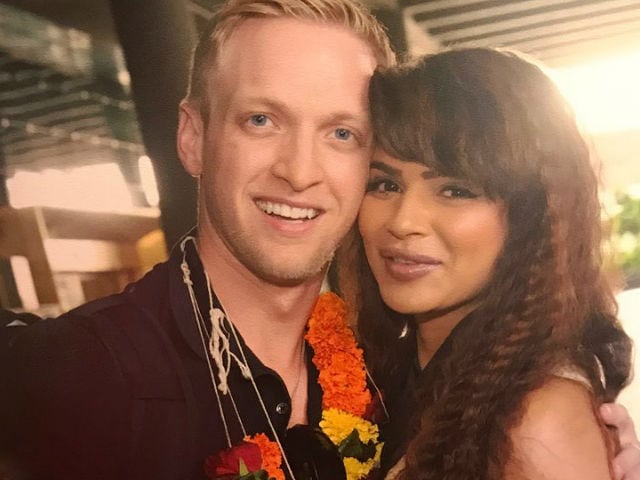 Aashka and Brent have not set a wedding date yet. (Image courtesy: Aashka Goradia)

Television actress Aashka Goradia got engaged to her American boyfriend Brent Goble on Christmas Day. The actress shared a picture with her new fiance on Instagram with a diamond set between two sapphires sparking on her finger and a dazzling smile and a decorated Christmas tree in the backdrop. Aashka also told Times of India that she is on "cloud nine." A source told TOI that Brent proposed to Aashka in front of his family on Christmas. Aashka and Brent made headlines in August after a series of their Instagram pictures went viral.
Aashka shared the news of her engagement with fans on Instagram:

Aashka and Brent reportedly met at an event in the US, soon after the Kkusum actress ended her 10-year-old relationship with Rahul Bakshi. Brent is a weapons instructor and range safety officer in Las Vegas.
Talking about Brent and her sudden engagement, Aashka, 31, told TOI: "The feeling is yet to settle in. Brent has made me believe that love and companionship exist and one should never give up hope. I am looking forward to a future, which is filled with happiness and togetherness with him." Aashka also said that she's not in a hurry to get married. Aashka in an earlier interview told TOI that she will not relocate to Las Vegas instead Brent will move to India.
Aashka Goradia featured on television shows like Bharat Ka Veer Putra - Maharana Pratap and currently plays the role of a shape-shifting bee, Rani Avantika, in TV show Naagin 2.