Actress Shannen Doherty Opens Up About Her First Chemotherapy

"After my first treatment, I couldn't eat, I couldn't drink - I was really weak. My husband sat on the bed, and he was crying, saying, 'Please, you can't sustain like this, Shannen'," she said 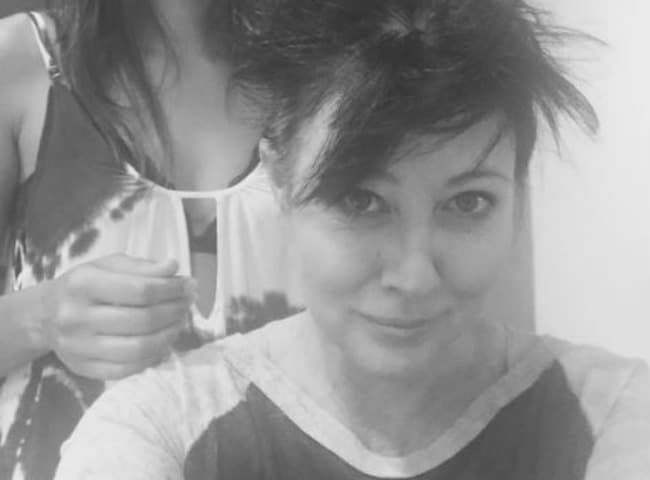 Actress Shannen Doherty admits that her chemotherapy treatment is taking a toll on her general well-being. She recounted how her first chemo left her husband in tears.
"The worst day was the confirmation that I had cancer because you just look at the people you love and think, 'I can't believe I have to tell them this'," the former Beverly Hills, 90210 star said in an interview with Entertainment Tonight.
Ms Doherty, 45, last year revealed that she has been battling breast cancer since March 2015.
"I had breast cancer that spread to the lymph nodes, and from one of my surgeries we discovered that some of the cancer cells might have actually gone out of the lymph nodes. So for that reason, we are doing chemo, and then after chemo, I'll do radiation," Ms Doherty said during the interview.
She added: "The unknown is always the scariest part. 'Is the chemo going to work? Is the radiation going to work? You know, am I going to have to go through this again, or am I going to get secondary cancer?'"
However, despite being fearful for her future, Ms Doherty continues to receive support from her loved ones, especially her husband, Kurt Iswarienko.
"After my first treatment, I couldn't eat, I couldn't drink - I was really weak. My husband sat on the bed, and he was crying, saying, 'Please, you can't sustain like this, Shannen'," she said.
"That's when he picked me up and put me in the car (to go to the hospital). And my mom was right there with him. Watching your family be so affected, that's the rough days," she said.
By publicly announcing her struggle, Ms Doherty said she did it for her own well-being.
"Putting it out there was definitely my way of sort of trying to control what was said. I've had not-so-nice stories a month ago about how I look lately - no mention of cancer or anything," she said.
"I wanted to put it out there the way that it felt the best for me to put it out there," she added.
Meanwhile, Ms Doherty also Instagrammed this post on Sunday:


She was fierce, she was strong, she wasn't simple. She was crazy and sometimes she barely slept. She always had something to say. She had flaws and that was ok. And when she was down, she got right back up. She was a beast in her own way, but one idea described her best. She was unstoppable and she took anything she wanted with a smile. R.M. Drake. #cancersucks #warrior #fightlikeagirl