After Vogue India Cover Shoot With Kendell Jenner, Sushant Singh Rajput Will Be On Keeping Up With The Kardashians 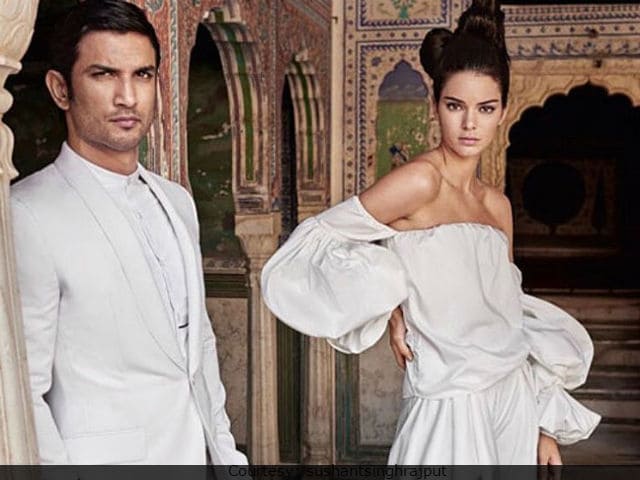 Actor Sushant Singh Rajput, who recently shot for Vogue India's special 10th anniversary edition with model, television personality Kendall Jenner, will soon be seen on hit American reality television show, Keeping Up With The Kardashians, reports mid-day. Sushant, 31, said that he has already shot for a part on the show. "I have also shot a segment for an episode of Keeping Up With The Kardashians. I would have loved to show her (Kendall) around, but couldn't due to security issues. The palace where we stayed was huge and the food was great too. I ended the shoot with a nice conversation with her, Mario, Anaita and the crew," he told mid-day.
Keeping Up With The Kardashians focusses on the lives of the Kardashian and Jenner family. It stars Kourtney Kardashian, Kim Kardashian, Khloe Kardashian, Rob Kardashian, Kris Jenner, Caitlyn Jenner, Kendall Jenner and Kylie Jenner.
Of taking up new roles, Sushant told mid-day, "As an actor I need to convince you that I am the part. So if I play a guy who is stylish, it is my job to make you believe that, irrespective of your perception."
Kendell's appearance on the magazine's cover received flak on social media. Twitterati questioned why Kendell was chosen over other Indian models and actresses.
Here's the picture:

Meanwhile, Sushant told mid-day that he learnt many things about fashion from Kendell and said, "She was happy to note that I am tall."
Sushant has also been shot by ace celebrity photographer Mario Testino in his towel series.
Sushant Singh Rajput is currently awaiting the release of Raabta, opposite Kriti Sanon and he is also prepping for Chanda Mama Door Ke.