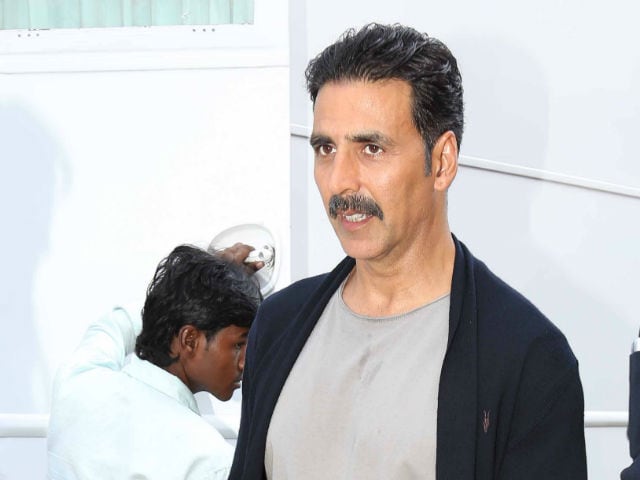 Akshay Kumar on the sets of Yaaron Ki Baraat

Actor Akshay Kumar and producer Sajid Nadiadwala will appear on the grand finale episode of celebrity talk show Yaaron Ki Baraat, hosted by best friends Sajid Khan and Riteish Deshmukh. The show, which celebrates celebrity friendships, started airing in October. Akshay and Sajid's friendship is over a decade old and the duo have delivered many hit films together, starting with 1993's Waqt Hamara Hai to Housefull 3 this year. A picture of the reunion was shared on Twitter by host Sajid Khan from the sets of the show. He captioned it as, "What a mazedaar grand finale." The show's first guests were actors Amitabh Bachchan and Shatrughan Sinha.
Here's what Sajid Khan tweeted. 'Sundi' is the name of Akshay's character in Housefull 3, whoch co-starred Riteish:


When u wake up so early for the #yaaronkibaraat grand finale episode shoot...u can take a wild guess who the guest is#savingthebestforlast

Sajid Khan, who has directed several of Sajid Nadiadwala's films, including Heyy Baby and the first two Housefull movies, also shares a great bond with both of them. Heyy Baby, released in 2007, was his debut film as a director. The film, produced by Sajid Nadiadwala, featured Akshay and Riteish as well as Fardeen Khan and Vidya Balan. Sajid Nadiadwala, Akshay Kumar and Sajid Khan are considered to be a powerful filmmaking trio.
The episode is expected to air this Sunday.
Sajid Khan and Riteish Deshmukh have till now hosted many Bollywood stars including Shah Rukh Khan and Anushka Sharma, Masti co-stars Vivek Oberoi and Aftab Shivdasani, and Kahaani team Sujoy Ghosh and Vidya Balan, to name a few.
Akshay, 49, recently appeared on Karan Johar's chat show Koffee with Karan 5 with his wife, author Twinkle Khanna.
Akshay Kumar is busy shooting for his upcoming film Toilet-Ek Prem Katha along with Dum Laga Ke Haisha actress Bhumi Pednekar. His film Jolly LLB 2, co-starring Huma Qureshi, is also ready and is scheduled to release on February 10.