Ariana and Jimmy Fallon had a brief argument prompting the latter to sing Is it too late to say sorry?. The conversation that started with Mr Fallon introducing himself to Ariana as Me Myself and I, ended with the two singing NSYNC's Bye Bye Bye in turns 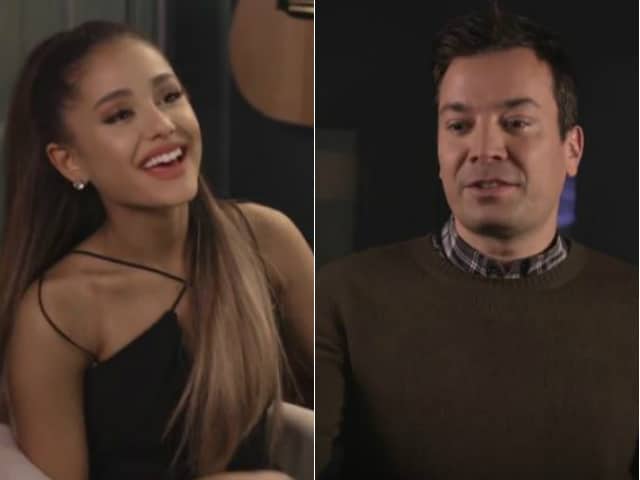 Stills from the video shared by The Tonight Show Starring Jimmy Fallon.

Singer Ariana Grande and celebrity host Jimmy Fallon, exchanged pleasantries and planned out their weekend shenanigans in no ordinary way. They lip-synced.
They used songs like G-Eazy and Bebe Rexha's Me, Myself And I, Rock band 4 Non Blondes' What's Up, Mike Posner's I Took A Pill In Ibiza, Lukas Graham's Seven Years Old, Frank Sinatra's It Was a Very Good Year, Twenty One Pilots' Stressed Out, Major Lazer and DJ Snake's Lean On, Rihanna and Drake's Work, Fifth Symphony's Work From Home, Magic's Rude, Justin Bieber's Sorry and What Do You Mean...phew...wait there's more..Sia's Chandelier, Zayn Mallik's Pillow Talk, DNCE's Cake By The Ocean, Colton Jacobson's Sand Castle and Ariana's own number Dangerous Woman.
Ariana and Mr Fallon finally decided to meet on Saturday to have a beach party and make sand castles. The duo even had a brief argument prompting Mr Fallon to sing Is it too late to say sorry?. The conversation that started with Mr Fallon, 41, introducing himself to Ariana with Me Myself and I, ended with the two singing NSYNC's Bye Bye Bye in turns.
The entire action takes place in the 22-year-old singer's dressing room, who appeared on The Late Night Show With Jimmy Fallon on April 25.
Watch:

Meanwhile, the singer also revealed that her grandmother is a big Jimmy Fallon-fan:


thank you again @jimmyfallon@fallontonight ! nonna says "if jimmy calls, tell him I'll be back after ten".

This is how Team Fallon reacted: