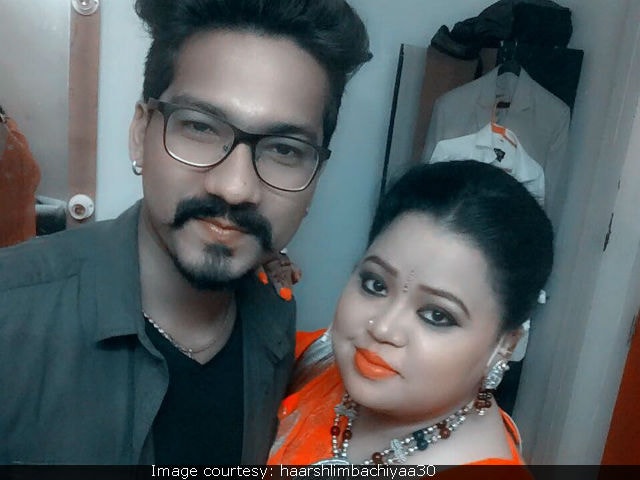 Stand-up comedian Bharti Singh, who debuted with the reality show The Great Indian Laughter Challenge, has reportedly got engaged to her long-time boyfriend and Comedy Nights Bachao scriptwriter Harsh Limbachiyaa. As per The Times Of India report, the roka ceremony was held on Sunday and was a very intimate affair attended by the couple's close friends and family. However, the couple has not given any statement regarding the engagement. The latest reports suggest that Bharti and Harsh have also been approached to participate in the dance reality show Nach Baliye. Bharti, 31, became a household name after she featured in Comedy Circus. She currently hosts Comedy Nights Bachao along with Krushna Abhishek.
The roka ceremony was held in Mumbai. TOI quoted a guest as saying, "It was a last minute decision as everything was organised overnight. Among their industry friends, the invite was extended to only a handful, including Krushna Abhishek and Kashmera Shah, producer Vipul D Shah and a few crew members of the comedy show." The couple is apparently planning to get married in November this year, suggested the report.
Though Bharti and Harsh have never admitted their relationship, but, the duo often posts pictures on Instagram with each other.

The comedian is often called 'Lalli' and has so far hosted a handful of comedy shows. She also featured in Jhalak Dikhhla Jaa and has also starred as a guest on various seasons of Bigg Boss. In 2012, she won the Indian Television Academy Awards for Best Actress - Comedy. Bharti was last seen in Pulkit Samrat and Yami Gautam's Sanam Re.