"This is truly the most exciting coup to have as our very first guests on our show as they both were last seen together in 1981 film Dostana," said Riteish, who will be co-hosting Yaaron Ki Baraat with Sajid Khan 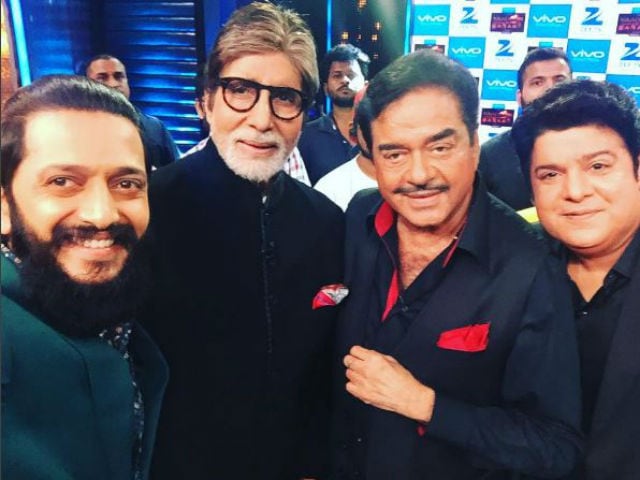 This image was posted on Instagram by Riteish Deshmukh

Actor Riteish Deshmukh, who will be seen co-hosting Yaaron Ki Baraat along with filmmaker Sajid Khan, had a 'fanboy' moment when superstar Amitabh Bachchan and actor-politician Shatrughan Sinha appeared on the upcoming TV show to talk about their friendship.
"It was a fanboy moment for me to sit in front of the two living legends whom we have grown up idolising. They put us at ease immediately with extremely endearing memories of their friendship," Riteish said in a statement.
"This is truly the most exciting coup to have as our very first guests on our show as they both were last seen together in 1981 film Dostana. This is the very first time they have appeared together on a TV show to speak about their friendship. They spoke candidly," he added.
Sajid, who has hosted a lot of award and TV shows, said it was a "completely different ballgame" for him to chat with Amitabh and Shatrughan.
"To be honest, I was very nervous. But the two of them were such a sport and very forthcoming about their friendship. Their conversation took us all to the golden era that we have only watched in the movies and they revealed so many things that we didn't know about them," Sajid said.
Amitabh and Shatrughan have appeared together in films like Dostana, Bombay to Goa, Naseeb, Kaala Patthar and Shaan.
The duo will be seen on the premiere episode of the Zee TV show on October 8.
(Except for the headline, this story has not been edited by NDTV staff and is published from a syndicated feed.)