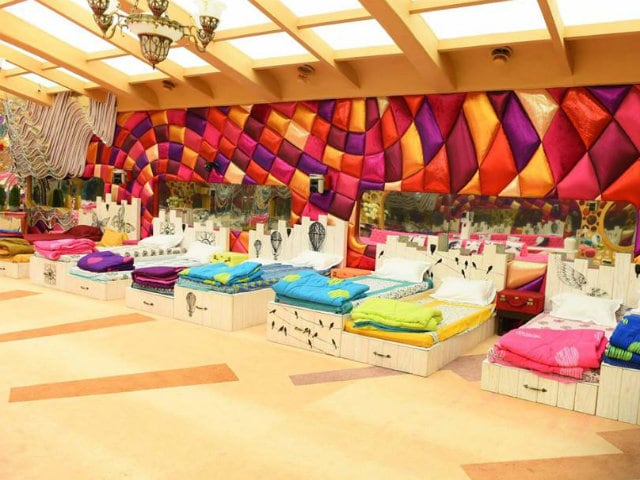 This image was posted on Facebook by COLORS TV

The chalet-styled house, where contestants of the ninth edition of the reality TV show will compete for the coveted trophy and prize money, was designed by Mary Kom director Omung Kumar, said Deepak Dhar, managing director of Endemol Shine India, producers of Bigg Boss Nau

Viewers of the reality TV show Bigg Boss are often told that the contestants have little, or, no contact with the outside world. A band of journalists found this to be true when the show's organisers put them in the locked-down house for over six hours to experience how the contestants will feel during their stay of 100 days.
Fourteen celebrity contestants, with different temperaments will be within the four walls and under the same roof and under the constant gaze of over 100 cameras as Bigg Boss Nau - the ninth edition of the Indian version of the international reality TV show Big Brother begins October 11, hosted by Salman Khan.
Curious journalists flew down from New Delhi, Kolkata and Mumbai and marched into the double-gated set of the show in Lonavala, a hill station in the Western Ghats, some 80 km away from Mumbai.
But first, they were made to surrender their cameras, phones, notebooks, pens, watches and were frisked by eagle-eyed crew members of the show.
Blindfolded, the journalists were escorted in pairs into the house and were asked to speak only in Hindi on the ornate premises, which is painted in a splatter of bright hues of blue and floral prints to keep with the spirit of the contest. Colours shared some of the pictures on Facebook, earlier on October 11.


Exclusive pictures straight from the Bigg Boss house! Tune in tonight at 9PM for all the action!

The chalet-styled house, where contestants of the ninth edition of the reality TV show will compete for the coveted trophy and prize money, was designed by Mary Kom director Omung Kumar, said Deepak Dhar, managing director of Endemol Shine India, producers of Bigg Boss Nau.
"Omung took four months to design the house. We love this because it's different from any other show. But in this show you can change the theme, house and element. We are spoilt for choice because we have about 50 countries where this show is running and we meet most of the creative directors of those countries almost twice a year," Mr Dhar told IANS. (Also Read: Salman Khan to Have Personalised Chalet Near Big Boss House)
The Yin and Yang pools punctuate the gardens, with lounge beds for ideal for sunbathing.
The balcony overlooks a lush green garden, with a purpose of accentuating courtship among the attending couples, while the living room contained a purple sofa, multi-coloured cushions and shaded chandeliers that face toward the Me TV, a major prop in the show.
The dining area stretched to an open kitchen but the most interesting part was the 14 multi-coloured seats attached to each other in pairs.
The 14-bed dormitory was in a pair of seven, facing a cheeky, candy-pink lounging sofa. At the back of the beds were bright coloured cushions pinned to the wall. A silhouette of a man holding a woman on the wall highlighted the romance factor.
When asked if the show will get any bolder than before, Mr Dhar told IANS: "I can't really tell if it's going to be bolder or will it be tamer, because that really depends on the house mates, on how they really project themselves."
The Bigg Boss Nau bathroom is a distinct French Moulin Rouge experience with typical shades of red with bulbs piping the mirror to light up the participants as they freshen up.
The journalists were served breakfast and then the commanding voice of Big Boss announced: "Nominations ki prakriya shuru hogayi hai (the process for nominations has begun)".
Later, the journalists were called into the confession room to nominate two other fellow reporters.
Unexpectedly, journalists were also given tasks, like contestants.
In pairs, the reporters had to hold footballs with one hand and walk forward and backwards as per instructions. The second task was to communicate through singing.
Finally, Bigg Boss asked the journalists to vacate the house in a group from its main entrance by 4 in the evening.
The six-hour experience left a sobering memory of camaraderie as it dawned upon us that one too can live without modern gadgets and lifestyle.