Bigg Boss 10: Salman Khan celebrated the New Year's Eve inside the house with the contestants 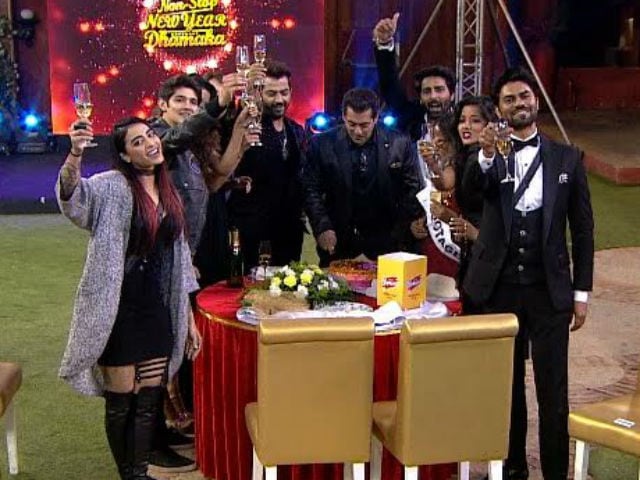 Bigg Boss 10: The entire episode was full of fun and laughter

The New Year special episode of Bigg Boss 10 started with superstar Salman Khan's performance on his hit songs. After that, he showed a video of the contestants talking about the year so far and their New Year resolution. He then interacted with the contestants and asked them about their experience. Salman was later joined onstage by stand-up comedians Krushna Abhishek and Bharti Singh. A party was organised for the contestants in the lawn for New Year's Eve which began with a dance performance by television star Karishma Tanna. Salman surprised the contestants with his entry into the house and said that he would be celebrating the New Year's Eve with them.


Looks like @BeingSalmanKhan is all set for a rocking entry into 2017 with non-stop New Year Dhamaka! Stay tuned to #BB10NewYearKaVaarpic.twitter.com/Qg2Jq1inar

Ex-contestants Vindu Dara Singh, Lokesh and Bhojpuri star Ravi Kishan also joined Krushna and Bharati. They spoke to the contestants about their journey and experience. The television stars mesmerised the contestants with their dance performance and rib-tickling comedy.
Salman later introduced the Bigg Boss awards, where the contestants were given some 'special awards' under various categories. He then showed a video on Bani and Lopamudra's catfight. The two get Jaani Dushman title. Gaurav receives the title of Kaamchor and Swami Om, the 'footage king.' The entire episode was full of fun and laughter.


#OmSwami gets the title of 'Footage King'! RT and tell us which other title should be given to Om Swami! #BB10NewYearKaVaarpic.twitter.com/8MYRxHVUQG

After the performances, Salman and the contestants cut and a cake and wished everyone a Happy New Year.
As of now, Bigg Boss 10 is hosting nine contestants. Monalisa, Gaurav Chopra and Bani J are nominated for evictions this week. In tonight's episode, one of them get evicted.