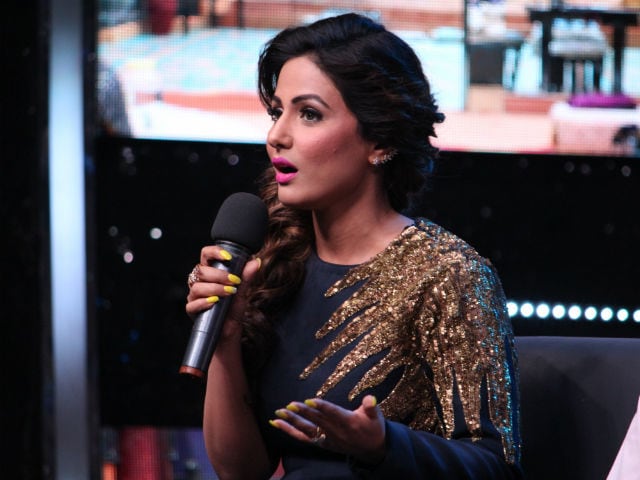 Bigg Boss 10: Hina Khan in a still from the show

After a highly-dramatic Saturday's Weekend Ka Vaar episode, where Salman Khan rebuked Swami Om for his absurd behaviour, viewers in today's episode will see television actress Hina Khan on Bigg Boss 10. She will join Salman Ki Sabha, where she will talk about her onscreen son Rohan Mehra's (Naksha) performance so far in the show. Hina Khan played Rohan's onscreen mother in the popular television show Yeh Rishta Kya Kehlata Hai. She recently quit the show after eight years and there were reports that she would join Bigg Boss 10 as a contestant. But, the actress denied the rumours. She, however, shared a picture of hers with Salman Khan on social media and mentioned about appearing on the Weekend Ka Vaar episode.
Here's what she posted about appearing on Bigg Boss 10's Weekend Ka Vaar episode:


Met the Bigboss @BeingSalmanKhan of Bollywood.. finally a selfie with my Sallu #fangirl thank you @ColorsTVpic.twitter.com/cxkXBgfXSs

Like her character on the show, Hina will be advising Rohan about taking a stand about right and wrong. Hina will also reveal that she was shocked to see Rohan fighting and raising his voice, as in real life he isn't like that. Hina Khan tells Salman that she is really proud of Rohan as he being an introvert, is interacting with everybody. Furthermore, she will also be speaking about Priyanka Jagga, who spit on Rohan over an argument. The 29-year-old actress questions Priyanka's actions and asks what is she teaching her children as they might be watching the show?

Hina is an ardent follower of the show and is supporting Rohan Mehra from Day 1. The actress has numerous times tweeted about voting for Rohan. Both of them share a very good rapport offscreen.
Meanwhile VJ Bani's friends will also be seen along with Hina, where they will talk about her performance.
Today's episode promises to be interesting as the viewers will get to know more about their favourite contestant.