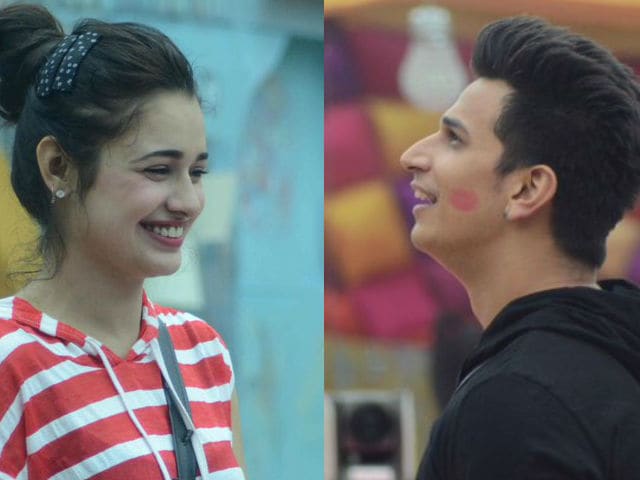 When asked if the proposal was for the show only, Yuvika replied: "No, I don't think so that he did this for the game. I had told Prince that 'Wow, the game would start now?' and then he replied by saying that 'No, it is genuine and that's why I don't want to exaggerate this here'."

Actress Yuvika Chaudhary, fifth contestant to get eliminated from the celebrity reality show Bigg Boss 9, said that her "romance" with former housemate Prince Narula was "one-sided".
In a recent episode of the ongoing show, Prince, who was the winner of youth-based reality show MTV Splitsvilla 8, had proposed to the actress.
When asked what was cooking between the two, Yuvika told IANS: "Honestly saying, it was one-sided. But when I came to know that Prince likes me, I was surprised and happy."
She also said that she really "loved" the attention she got from Prince and Rishabh Sinha, who too has a soft corner for her.
"Of course any girl will like if somebody likes or loves her. I loved it. Prince showed his feelings and he was confident I loved that too. Rishabh too likes me. I loved that part too," she added. (Also Read: Yuvika Chaudhary Eliminated From Bigg Boss, Says 'It's a Challenging Life')
Was the proposal for the show? Yuvika replied: "No, I don't think so that he did this for the game. I had told Prince that 'Wow, the game would start now?' and then he replied by saying that 'No, it is genuine and that's why I don't want to exaggerate this here'."
Yuvika, who had made her debut in Bollywood with the 2007 film Om Shanti Om, had entered the house as Vikas Bhalla's partner, who was evicted the previous week.
The 32-year-old actress said that she wants Suyyash Rai, Kishwar Merchant or Prince to win the ninth season of the reality show.
"Kishwar and Prince are very strong. I really want Suyyash to win too, but he has lost interest. If he becomes more active, I would want one of these three to win," she said.
Other contestants left in Bigg Boss 9 apart from the trio and Rishabh include Rochelle Rao, Aman Verma, Digangana Suryavanshi, Rimi Sen and Puneet Vashist.
What is she planning to do now? Yuvika said: "I have no idea what I am going to do. It's going to take time to sink in that I'm not a part of the house anymore. I am going to enjoy Diwali (with my family). I have one film, which is going to start, but till the time the show is on, I can't do anything else. It's in the contract."