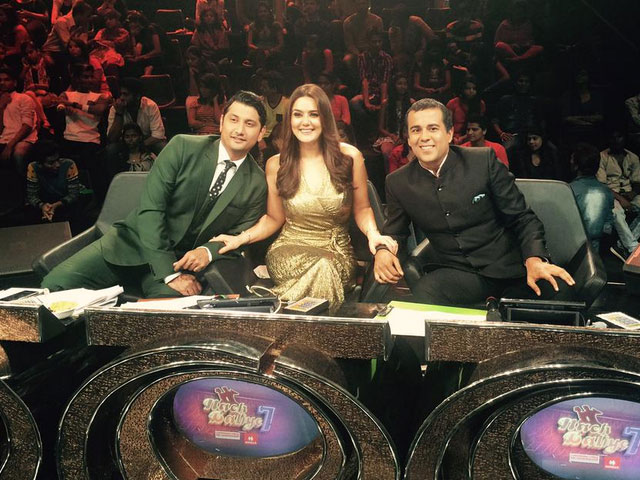 Mr Bhagat, who appeared to be amused that the judge was being judged, wrote on Twitter: Those who have judged me for years without writing a bestseller themselves are now judging how can I judge a fun reality show. haha. cute

Author Chetan Bhagat made a much-discussed TV debut as judge on dance reality show Nach Baliye last night, with actress Preity Zinta and choreographer Marzi Pestonji for company on the panel.
The unlikelihood of this was commented on by Twitter in March, when it was revealed that Mr Bhagat would preside over the competition, now in its seventh season. The 2 States writer himself claimed no expertise in dance, telling news agency IANS, "Yes, it is a risk. It could really work or I could end up making a fool of myself."
So how did he do? Mr Bhagat appeared to be amused that the judge was being judged:


Those who have judged me for years without writing a bestseller themselves are now judging how can I judge a fun reality show. haha. cute.

He also offered this comment on the TV-watching habits of the tweeting public:


Entertainment industry rule#1: what people say they want to see, vs what they actually see, may be quite different. Particularly on twitter.

Twitter has an opinion on this, like it does on most things. Or opinions, rather.
Several tweets outright savaged his performance:


NachBaliye has to be a big no no for me this season!;Judges can't give scores ;Chetan trying too hard;No fun laughs between dances

Chetan Bhagat's performance as judge on NachBaliye7 tonight can be termed as, One Night At The LOL Center

Others, like stand-up comic Aditi Mittal and author Samit Basu, weren't letting the opportunity pass by joke-less. Mr Bhagat found Mr Basu's quip funny, for one, because he retweeted it:


All you achievers, Chetan Bhagat is a judge on Nach Baliye so you should probably all take your talent put it in the bank coz you are poor

Not everyone hated on Mr Bhagat and were also promptly retweeted by him:


OMG! @chetan_bhagat at NachBaliye7 is doing a damn gd job at judging. Finally someone is not tryin to#sugarcoat things. TheRealJudgeChetan

@chetan_bhagat perhaps u are the best judge i have ever seen. all the word came from your mouth. just loving it.


Watching NachBaliye7 & It really is toomuchhats off 2the contestants4 putting themselves out there 2be judged. Specially the 1st timers

The contestants on the new season of Nach Baliye include Karishma Tanna and Upen Patel who recently found love on Bigg Boss, actress Payal Rohatgi and her wrestler fiance; Sangram Singh, and actresses Sana Saeed and Smilie Suri with their respective partners.