Teejay has been in Vancouver, Canada while Karanvir was busy shooting Naagin 2 with Mouni Roy and Adaa Khan. But the actor made a point to visit his wife recently and did an adorable maternity photoshoot 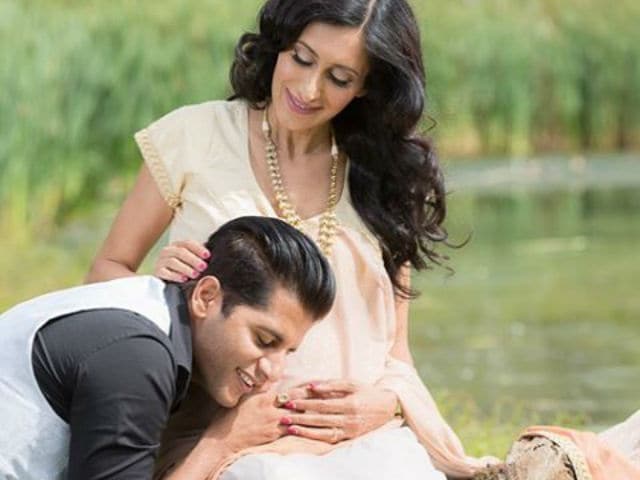 The news melted our hearts. TV actors Karanvir Bohra and Teejay Sidhu have been blessed with twin girls reportedly.
The news broke the Internet on October 21 and Naagin 2 actor and his wife has been trending ever since.
Teejay has been in Vancouver, Canada while Karanvir was busy shooting Naagin 2 with Mouni Roy and Adaa Khan. But the actor made a point to visit his wife recently and they did this adorable maternity photoshoot.


The first pic from our maternity photo shoot @bombaysunshine And we are just at the finish line My child is so blessed to have a mother like you, the same way I'm so blessed to have a woman like you in my life....all God's grace I can't even fathom the way our life is going to change, but I do believe, the way we have sailed the seas of our relationship beat the turbulent waves of hardships and anchored on the Shores of loveThis too shall be another journey "To Worlds End" in our "Black Pearl" Let's fasten our seat belts darling. And lots of thanks to my dearest @kimbasran for organising this beautiful #photoshoot the #makeup #styling....you are truly a darling, this wouldn't have happened without you. @anu.kang than you for the lovely hair styling of my bebu @bombaysunshine @geno_dot_ca thank you for your remarkable photography....your hands are magic. #bratpacks if you guys want to see the next photo from this photo shoot, check my friend/photographer @geno_dot_ca #instagram page on Saturday And to see the entire photo shoot, log on to my YouTube channel #karanvirnama on

During an interview to the The Times of India, Karanvir had revealed that from now on everything will be secondary and their baby will be the priority.
Teejay, who quit her show Santoshi Maa, shared the news of her pregnancy in late June. She mentioned it was a 'pleasant shock' for Karanvir.
"The news came as a pleasant shock. Karanvir didn't believe me at first when I informed him. In fact, it took us some time to digest the news. I'd signed a three-year contract for my TV show, and I wasn't expecting a little person just yet. But of course, we are thrilled! Work can wait. Now, it's time to trust God's timing and his plan," Teejay told Times of India.
And since then, the couple has been Instagramming heart melting pictures on social media.


Last week.. Catching a quick snooze in the October morning sunshine. :) Didn't realize my sister had taken this photo of me! Haha! When you're an expectant Mom, you treasure every little bit of sleep you can get, wherever you can get it! ;)

To be loved so much - this is one of the things I'm most thankful for in my life. :) I am also thankful for the blessing yet to come, the one that is yet unseen. ;) We believe so much in God, and we are grateful everyday for his grace - but being chosen to bring a little baby soul into this world is a different kind of blessing - it means God believes in US. That is more humbling than I can even describe!! I wish all of you a beautiful #Thanksgiving, and pray God keeps shining His grace in your life! PS: What are you thankful for this year? :)

Awww! So cute! :) This is the advantage of having a big family - they take turns spoiling your baby before it's even born!! Haha! Since we don't know if it's a boy or girl, my little sister Roop bought both of these #Disney one-sies! :) They're so tiny!! Thank you @pinkstarz19, I love them! So what do you guys think? Is it a #boy or #girl? ;)

I have always thought there was too much goodness, kindness and love in you, that it had to be passed on to a little version of you one day! ;) This is all still a little crazy, right? :) Is it really happening?? Yes, it sure is! Haha! But the one thing I know for sure, is that you're going to be the most terrific father! This will be our best 'adventure' yet, my love @karanvirbohra :)

The future looks twice as bright when we look at it together. :) @karanvirbohra So, so happy you're here!! :) #VancouverDiaries

Karanvir Bohra and Teejay Sidhu married in 2006 in Bangalore.