Dangal's Sanya Malhotra, Fatima Sana Shaikh's Friends Thought They Were Dating Each Other 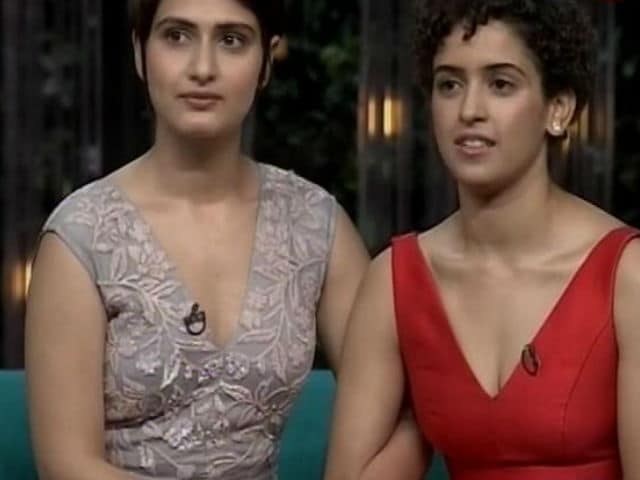 Sanya Malhotra and Fatima Sana Shaikh made their Koffee debut

Sanya Malhotra and Fatima Sana Shaikh revealed onKoffee With Karan that some of their friends thought they were dating each other. Sanya and Fatima, who are all set to debut in Aamir Khan's Dangal, which releases this Friday, were on the show to promote the film and even confessed that they were more excited about their Koffee debut than the big screen - Aamir gave a no comments look. Sanya and Fatima revealed that they bonded quite well while they auditioned for the film for more than a month and while filming they had no personal life and hence many of their friends believed they were dating each other. But Karan took the opportunity to debunk the rumour and said Sanya and Fatima are single and ready to mingle.
Vespa Ride
Sanya revealed that she used to ride pillion on her red vespa to reach the auditions. They had infact bonded so well that said Fatima she hoped that even if she's not cast, Sanya would make it. Fatima auditioned for the role of Geeta Phogat and Sanya auditioned for both Geeta and Babita's part.
OCD Ice-breaker
Fatima revealed that her OCD became the ice-breaker. Fatima said: "When I get nervous, I start arranging things near me. So I was arranging the notebooks and pens on the table and Sanya came up to me and said, 'you have OCD? Even I have OCD'." And that was a start of their friendship.
Clicking Pictures at Aamir Khan's Place
Aamir Khan and Dangal director Nitesh Tiwari invited Sanya and Fatima to tell them they've been cast as Babita and Geeta Phogat. However, the girls thought that they'll get to hear the opposite, sothey started clicking pictures of Aamir Khan's home - of the television, sofa, everything.
Aamir Khan's Dangal is a sports biopic based on the life of Mahavir Singh Phogat and his daughter Geeta and Babita Phogat in the sport of wrestling. The film, which also stars Sakshi Tanwar, will hit the screens on December 23.