Did Jason Momoa Tease Return of Khal Drogo on Game of Thrones 7.0?

It is being speculated that Jason is set to reprise his role as he was seen hanging out with the show's writers in Northern Ireland, near the shooting location of the series. 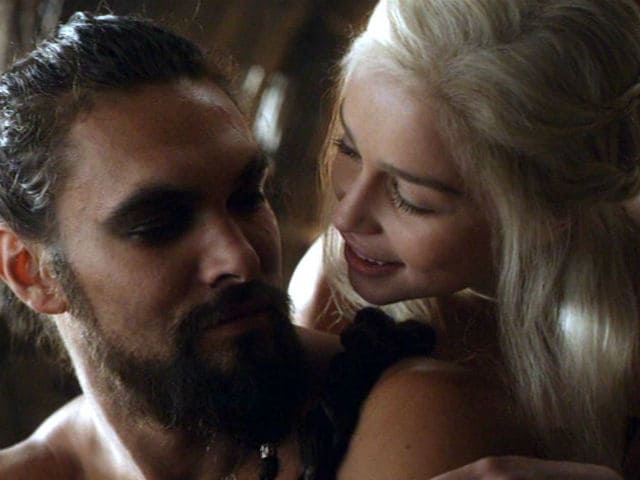 A still from Game of Thrones Season 1

The character Khal Drogo might just be back in Season 7 of popular fantasy drama TV series Game Of Thrones after a brief stint in the series' first season, if rumours are anything to go by.
It is being speculated that Jason Momoa -- who essayed Drogo in Season 1 of the series and briefly during a vision in the second season -- before being killed off, is set to reprise his role as he was seen hanging out with Game of Thrones show-runners David Benioff and Dan Weiss in Ireland where the filming is taking place, reports aceshowbiz.com.


Cheeeeehhoooooooooo. @Guinness in Ireland. Drinking mothers milk With my brothers @captainriff dan and david. Love ya GOT greatest show on earth ALOHA DROGO

Actress Maisie Williams, who essays the role of Arya Stark, posted on Twitter: "Just finished reading Season 7. S**t gets real. I'd start preparing yourselves now. Scratch that, nothing will prepare you for this. Holy Ba**s."
Actor Kit Harington, who plays the role of Jon Snow, also shared what to expect from the next season.
"I think it's going to get very bleak before if there is a happy ending," Kit said before having the script.
"If there's any sort of win or heroic moment for Jon and everyone else. I think it's going to get very dark before it gets better.
"I think what we might see this season is those White Walkers and that Army of the Dead really come into force. So that's going to be exciting to see. I don't know what it means. I think with the whole 'winter is finally here' business, it means everyone is going to have a really bad time," Kit added.