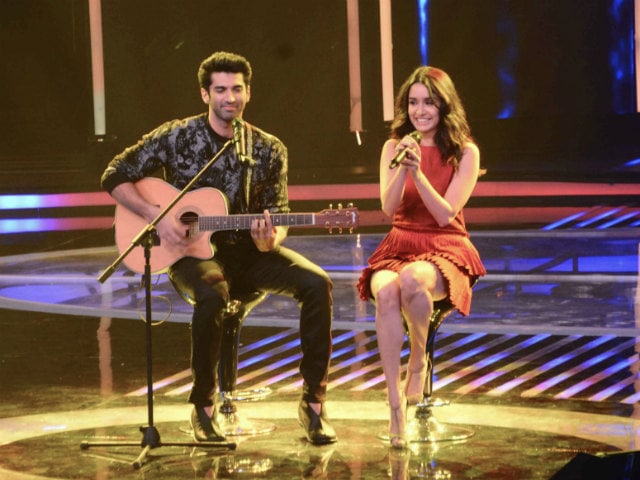 Aditya Roy Kapur and Shraddha Kapoor are already at the theatres with their new film OK Jaanu. Now, they will take over television with new talent show Dil Hai Hindustani. Shraddha and Aditya will be special guests on Dil Hai Hindustani, a show co-hosted by filmmaker Karan Johar and singers Shalmali Kholgade, Shekhar Ravjiani and Badshah. Now, now, there we have an OK Jaanu connection. Badshah has rapped for OK Jaanu's viral song - The Humma Song, which is the reworked version of A R Rahman's Nineties hit Humma Humma from the film Bombay. The original Humma Humma was sung by Remo Fernandes while credits for the revamped version go to Jubin Nautiyal and Shashaa Tirupati.
Dil Hai Hindustani airs over the weekend on Star Plus, who offered glimpses of the show on social media:

Aditya arrives with a guitar on the show and delivers a blockbuster Humma Humma performance with the rapper in tow. Shraddha, who looks cute as a button in a scarlet short dress, cheers on. Meanwhile, Shraddha Kapoor and Aditya Roy Kapur's OK Jaanu released on Friday and has received shout outs from their Bollywood friends and colleagues on Twitter. "Loved watching these two again," tweeted Sooraj Pancholi. The adorable chemistry of Shraddha and Aditya will make you fall in love," said Kriti Sanon.
After the Shraddha-Aditya special episode, Dil Hai Hindustani will have a superstar guest - Shah Rukh Khan is expected to promote his new film Raees on the show. News agency IANS reports that SRK's episode has already been recorded and will air on television on the next weekend. Shah Rukh Khan's Raees releases on January 25.
Dil Hai Hindustani is a musical talent show that features singers from around the world.