Dimpy Ganguli celebrated her daughter's 'debut in the society' recently. 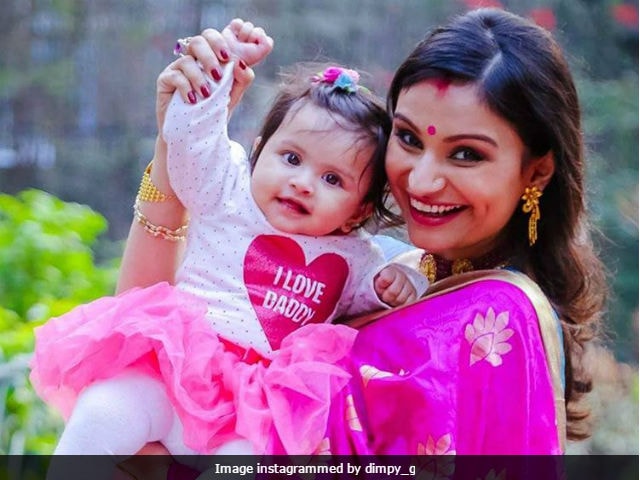 Former Bigg Boss contestant Dimpy Ganguli shared some beautiful pictures of her seven-month-old daughter on Instagram. The 31-year-old television actress recently celebrated her daughter, Reanna's 'debut in the society' along with family and close friends. The actress shared a series of photographs of her daughter and Reanna looks really excited getting clicked. Dimpy Ganguli got married to Dubai-based businessman, Rohit Roy, in November, 2015. She gave birth to Reanna on 20 June, 2016 and ever since the doting mother has been flooding her Instagram page with photographs of her little princess. From her first word to her witnessing the first rain, Reanna's pictures are just beyond adorable.
Check out the Reanna's cute video here:

Reanna was dressed in pink and white. She is also seen cutting a cake with the proud parents:


Reanna's debut in the society!

The actress also gave us sneak peek of her family's latest beautiful photo shoot. The mother and daughter duo looked lovely in colour coordinated outfits. See the pictures below:


The apple of our eye!

All we have is each other :)

It's a beautiful world my love...you just need the eyes to see it..

Dimpy Ganguli was earlier married to Rahul Mahajan, son of BJP leader Pramod Mahajan. Dimpy and Rahul got married in 2010 on reality show Swayamvar season 2 titled Rahul Dulhania Le Jayega. They also participated in Nach Baliye, a couple's reality dance show. The couple got divorced in February 2015. In 2014, she participated in the television reality shows Bigg Boss 8 and its spin-off Bigg Boss Halla Bol. Dimpy who is busy enjoying every moment of her daughter growing up, was also one of the contestants of Gladrags Mega Model Manhunt (2009) and the second runner-up in Sananda Tilottama (2007).