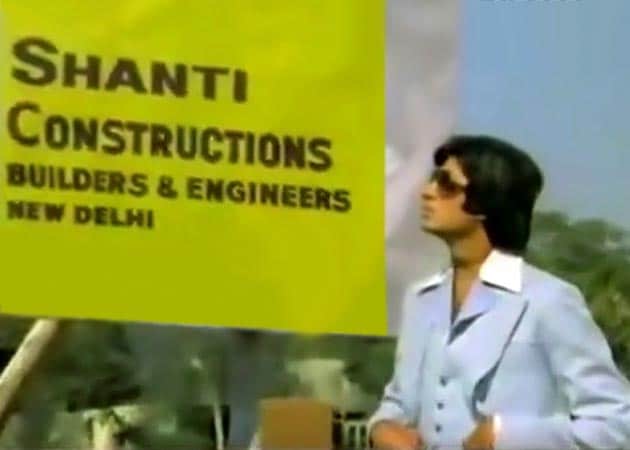 Amitabh Bachchan in a still from Trishul.

Actor Amitabh Bachchan rang the opening bell at the Bombay Stock Exchange on June 17 to promote TV show Yudh and Shanti Constructions, the name of the fictional company he heads on the show, may have rung a bell of a different sort for those who have watched 1978 film Trishul.
Shanti Constructions is also the name of the company Mr Bachchan presides over in Trishul, in which he plays the revenge-seeking illegitimate son of a construction magnate. Vijay, the character played by Mr Bachchan in the Yash Chopra-directed film, names his company after his mother and uses it to destroy his father's fortune and family. In one scene also featuring the secretary who switches companies and sides, Vijay memorably says, "Shanti Constructions - main iss naam ko aasmaan par likha dekhna chahta hoon (I want to see this name written across the sky)." (Also read: Amitabh Bachchan Rings BSE Opening Bell For TV Show Yudh )
Trishul, written by Salim-Javed, co-starred Sanjeev Kumar, Waheeda Rehman, Raakhee, Shashi Kapoor, Hema Malini and Poonam Dhillon in her first role. (Also read: Only the Best Will Succeed on Television: Amitabh Bachchan )
Amitabh Bachchan credits filmmaker Anurag Kashyap, who serves as creative director on Yudh, as the man behind the decision to borrow the name from Trishul. Mr Bachchan plays a construction baron in the show, his first foray into small screen fiction. Shanti Constructions has also been 'listed' on the BSE.
Watch: