Kerry Washington showed her style savvy at the Emmy Awards on Sunday (September 22, 2013) in fantasy gown in a blush color with gold embroidery that was at the Marchesa runway show just earlier this month.

Kerry Washington is the fashion It Girl right now, and she has the straight-from-the-runway dress to prove it.
The Scandal star showed her style savvy at the Emmy Awards on Sunday (September 22, 2013) in fantasy gown in a blush color with gold embroidery that was at the Marchesa runway show just earlier this month.
"This was their final look, and the moment I saw it I asked them to send it to me," Washington said.
The Emmys red carpet stepped it up with modern catwalk trends, interesting colors and some risks. There were romantic lace overlays, graphic black-and-white combinations, strategic skin-baring slashes and tough-girl harnesses.
Claire Danes of Homeland wore a light, delicate champagne-colored gown by Armani Prive with a tulle bodice covered in barely-there sequins and a flared gown.
Julia Louis-Dreyfus - an early winner for best comedy actress in Veep - had on a much more straightforward metallic column by Monique Lhuillier. 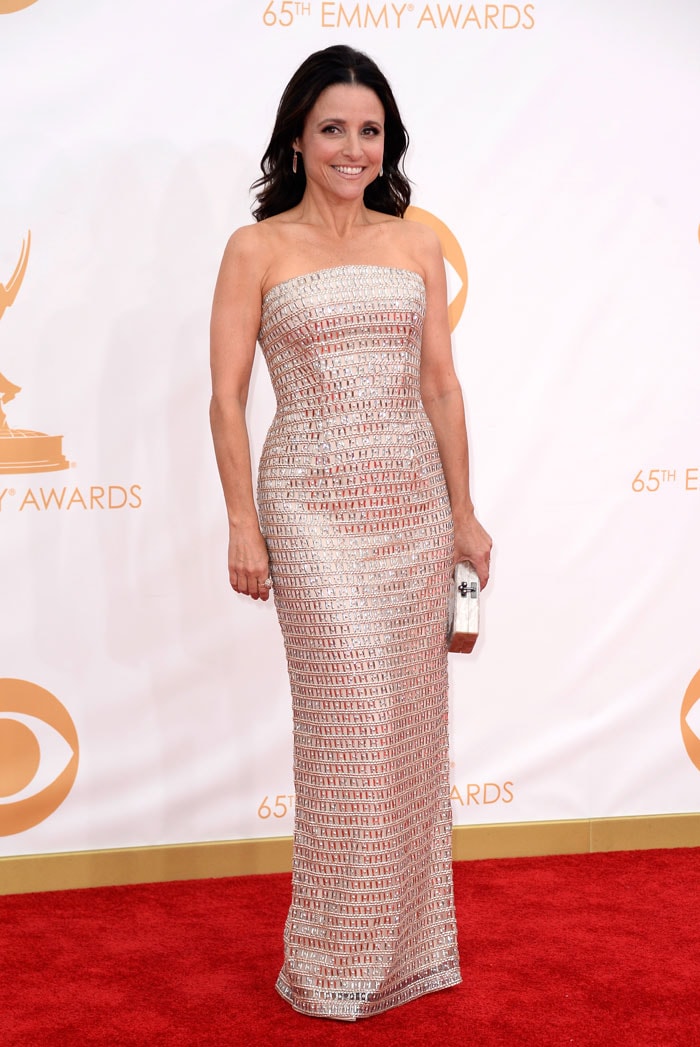 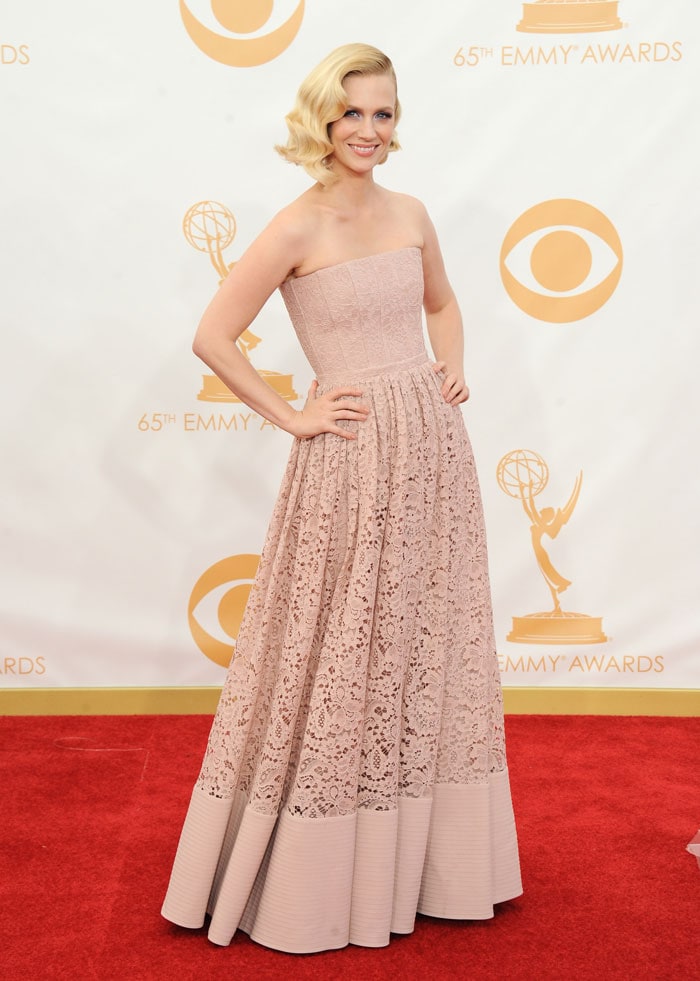 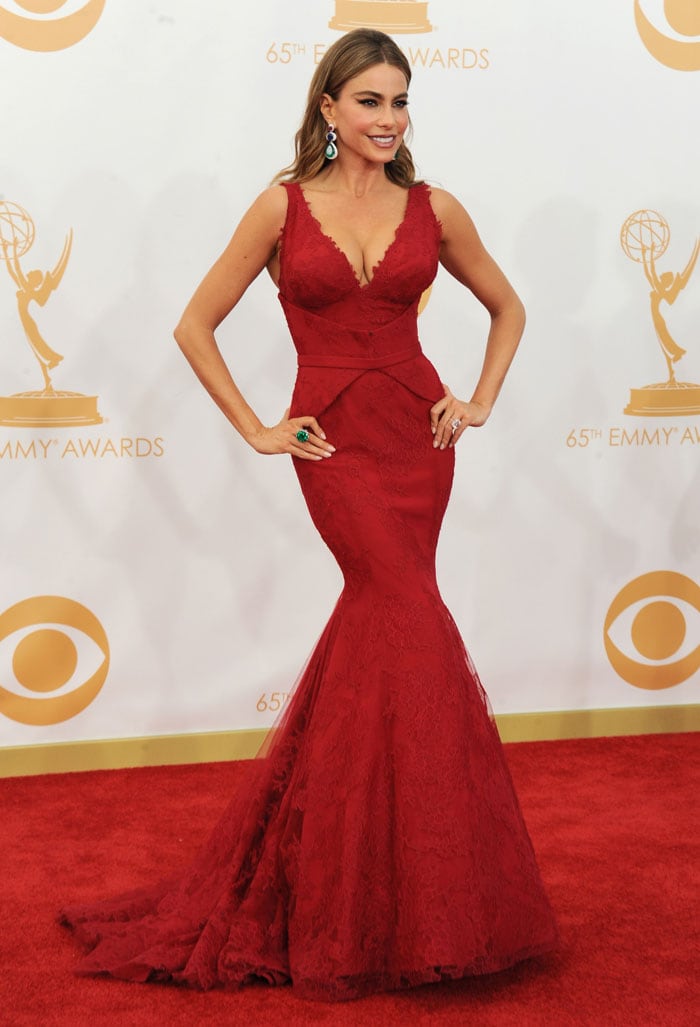 Sofia Vergara dialing up the sultriness in a red hot Vera Wang gown
The Modern Family star also had a plug for her retail partner Kmart, saying she had on underwear from there. "But you can't see that unless you rip the dress."
Tina Fey wore a royal-blue gown by Narciso Rodriguez that had a very open neckline but otherwise had the designer's minimalist touch. Allison Williams wore a similar color. Her gown by Ralph Lauren, strapless and an utterly clean silhouette, showed confidence. 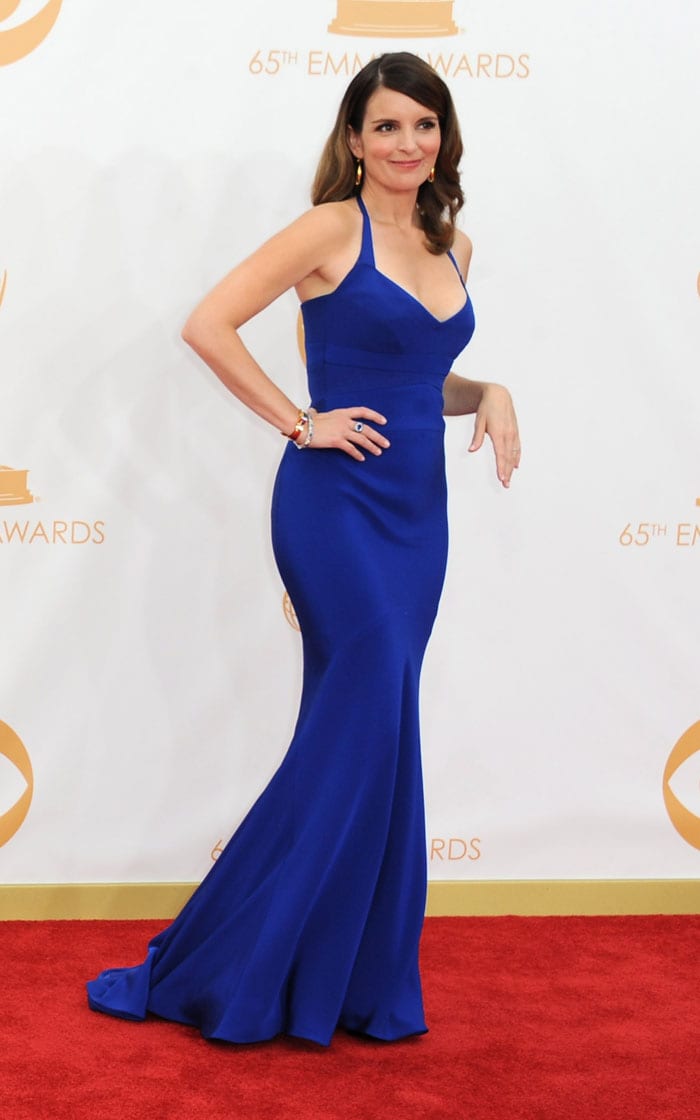 Tina Fey wore a beautiful blue Narciso Rodriguez gown
Connie Britton didn't shy away from embellishment with a gold-on-teal gown by Naeem Khan. Lena Dunham stood out on the carpet, too, but her floral-print dress seemed one of the fashion misses of the night.
Games of Thrones star Emilia Clarke might not be a household name yet, but she wore a skilled red carpet designer: Donna Karan. Every geometric leaf cutout was cut and folded onto the actress' body. She's likely landing on fashion watchers' lists.
Heidi Klum turned up in a hard-edge halter gown by Versace, while Top Chef host Padma Lakshmi, another seasoned poser, turned some heads in her sleek, white KaufmanFranco with an illusion halter neckline and a just-right flash of skin at her hip. 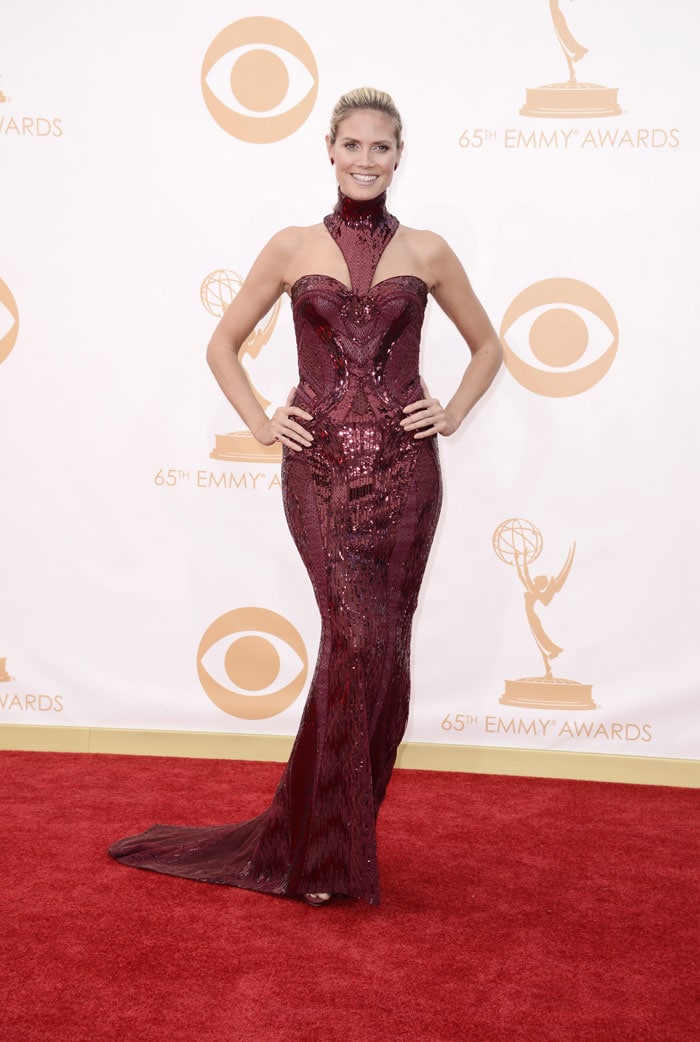 Heidi Klum rocked the red carpet in a maroon Versace gown.
Perhaps more important than the established style stars looking picture perfect, were the new names - and the up-and-coming designers they chose to wear. They all added a jolt of excitement that's been missing from what largely over the past few awards seasons have been a sea of perfect, classic black dresses.
Thakoon has dressed Michelle Obama, but the label still wasn't a go-to for the awards circuit. That changed here with Orange is the New Black star Taylor Schilling's white gown with a delicate halter top, mostly bare back and high slit.
Romona Keveza had an impressive showing with dresses for Anna Gunn of Breaking Bad, who wore an asymmetrical black beaded top over a light pink skirt, and Carrie Underwood in a more straightforward purple strapless.
Zosia Mamet of Girls wore a watercolor-print dress with a white bib front with black on the bustline by Honor, a new player on the celebrity circuit. It wasn't the typical Emmys look, to say the least - and that's going to get her photo beamed around the world.
Aubrey Plaza wore a harness-top gown by Marios Schwab that featured black lace over a sand-colored gown.
Keirnan Shipka showed she can go stiletto sandal to stiletto sandal with her fashion favorite Mad Men co-stars. She wore a bold floral top and a retro-vibe flared print skirt with hand-embroidered overlay with chunky jewels by Delpozo. Christina Hendricks was practically tame in her more delicate black Christian Siriano, but she managed to add her own vavavoom.
One of the most controversial looks, though, might come from Jon Hamm - and we're not talking about his decision to wear an ivory-colored dinner jacket by Armani instead of a classic tux. He came with a full beard, shielding the face that his fans have been waiting to see again during the show's long hiatus.