The blood-spattered, sex-filled saga about noble families vying for control of the Iron Throne took home the most coveted prize of the night, the best drama Emmy - along with statuettes for writing and directing 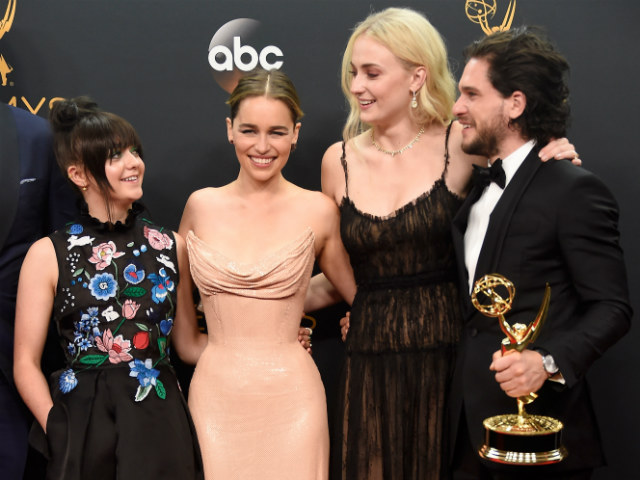 Fantasy epic Game of Thrones made television history at the 68th Emmy Awards on Sunday, becoming the most decorated fictional show since the awards began nearly seven decades ago.
The HBO series picked up 12 total Emmys this season - nine awards in technical categories and three top prizes at the glitzy ceremony in downtown Los Angeles - television's equivalent of the Oscars.
The blood-spattered, sex-filled saga about noble families vying for control of the Iron Throne took home the most coveted prize of the night, the best drama Emmy - along with statuettes for writing and directing.
That gives it a total haul over the years of 38 - more than any other narrative series since the first Television Academy prize-giving in 1949, overtaking the haul of 37 won by long-running comedy Frasier.
"We love Frasier and he had a long run and we're sure someone will come along and take it from us. We just hope it doesn't happen until we're all dead," showrunner David Benioff told reporters.
It went down to the wire in the end, as Game of Thrones drew a blank in the acting categories, despite being a hot favourite and having multiple nominees, and only set the record with the last prize of the night.
Three of its stars - Lena Headey, Emilia Clarke and Maisie Williams - dominated the betting in the supporting actress category, but the statuette went to Maggie Smith of Downton Abbey.
Peter Dinklage missed out on a supporting actor trophy, as did co-star Kit Harington, the category's favourite, with Ben Mendelsohn picking up the prize for Netflix family drama Bloodline.
The People v. O.J. Simpson: American Crime Story was also a big winner, picking up a total of nine awards this season, including the prize for best limited series.
"If your show doesn't have a dragon or a white Bronco in it, go home right now," host Jimmy Kimmel joked at the start of the three-hour broadcast, a reference to Game of Thrones and the infamous car Simpson was in when he went on a wild ride through Los Angeles before his arrest.
The all-time Emmy list of winners, which includes nonfiction, is topped by NBC comedy sketch show Saturday Night Live, with 45 awards, one of them handed out Sunday to Kate McKinnon for best supporting actress.
Emmy milestone for Louis-Dreyfus
It was a night of recognition for old hands in the comedy categories, while the drama awards went to relative newcomers.
In the best actress in a comedy category, Julia Louis-Dreyfus won a fifth consecutive Emmy for her role as the hapless acting president on HBO's Veep.
"I would like to dedicate this to my father who passed away on Friday, and I'm so glad that he liked 'Veep' because his opinion was the one that really mattered," she said in an emotional tribute, her voice breaking.
Veep later picked up the Emmy for outstanding comedy series.
The award for best actor in a comedy went for the second year in a row to Jeffrey Tambor for Transparent, who pleaded with producers and directors to give transgender talent a chance in television.
In the tightest race of the night, lead actress in a drama, Tatiana Maslany won for Orphan Black, pipping favourite Robin Wright (House of Cards) and last year's victor Viola Davis (How to Get Away with Murder).
House of Cards star Kevin Spacey, who has never won an Emmy, missed out again for outstanding actor in a drama, which went to Rami Malek, the star of cyberspace security thriller Mr. Robot.
Political night
Ex-presidential hopeful Jeb Bush made a surprise appearance as a limo driver in a televised opening joke sequence, asking Kimmel what it's like to be nominated.
Several stars took aim at divisive Republican presidential hopeful Donald Trump, either in prepared jokes or in acceptance speeches.
"I want everyone to know that after careful consideration, I decided I'm going with Trump, which is why I'm saying we should get rid of all Hispanic and Muslim actors," said award-winning comedian and writer Aziz Ansari.
Glory for 'People v. O.J. Simpson
The win for FX's The People v. O.J. Simpson for best limited series was the most widely predicted victory of the night, and the show, a scripted drama recounting the American football star's shocking fall from grace, swept up acting prizes.
Sarah Paulson and Courtney B Vance were rewarded in the lead acting categories for their acclaimed portrayals of sparring attorneys Marcia Clark and Johnnie Cochran.
Sterling K Brown took home a statuette for his supporting actor role, while D V DeVincentis was recognized for the show's writing.
In the battle of the networks, perennial leader HBO finished top with 22 Emmys, six on Sunday to add to its 16 from the Creative Arts Emmys ceremony last weekend.
FX, which scored the most nominations in history for a basic cable network, ended the night on 18 in total twice as many as third-placed Netflix.