Emmys 2016: How Everyone Touched Upon Presidential Politics

Julia Louis-Dreyfus, who won her fifth consecutive award for her role as president in HBO's Veep, set the tone for the evening by jokingly apologizing for "the current political climate" 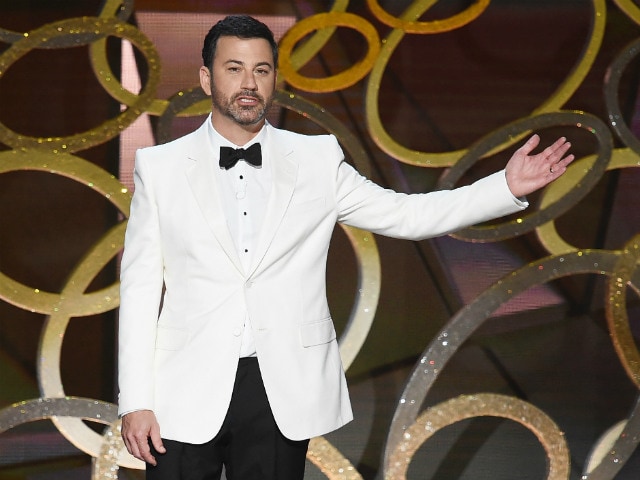 The race for the White House took centre stage at the Emmy Awards on Sunday with plenty of jabs at Republican presidential nominee Donald Trump, who was compared to Adolf Hitler, and a shout out to Hillary Clinton.
Julia Louis-Dreyfus, who won her fifth consecutive award for her role as president in HBO's Veep, set the tone for the evening by jokingly apologizing for "the current political climate."
"I think that Veep has torn down the wall between comedy and politics," she said as she accepted her award. "Our show started out as a political satire, but now it seems like a documentary. So, I certainly do promise to rebuilt that wall and make Mexico pay for it," she said.
Host Jimmy Kimmel also pulled no punches, at one point referring to Trump's wife Melania as "Malaria."
"If it wasn't for television, would Donald Trump be running for president?" Mr Kimmel said.
"No. He would be at home quietly rubbing up against his wife Malaria while she pretends to be asleep," he said.
Mr Kimmel later fake-blamed uber-producer Mark Burnett, who brought Trump's The Apprentice to the small screen for the billionaire's political rise.
"Thanks to Mark, we don't have to watch reality shows anymore, because we're living in one," the late night host quipped.
- Inheritor to Hitler -
But perhaps the strongest denunciation of Trump came from Transparent" creator Jill Soloway, who likened the bombastic tycoon to Hitler.
"He is a complete dangerous monster and any time I can call out Trump for being an inheritor to Hitler, I will," Ms Soloway told reporters backstage after accepting her award.
She went on to blast Trump for "Otherizing people with a capital O."
"He calls women pigs if they don't look like beauty pageant contestants, he blames Muslims and Mexicans for our problems, he makes fun of disabled people," she said angrily.
Veep producer David Mandel also spoke about Trump, saying that if he dared use similar rhetoric as that of the divisive candidate on the HBO comedy, he would be fired.
"I find the level of discourse in this campaign to be horrific. It's been a crazy year of politics," he said.
Emmy-winning comedian and writer Aziz Ansari took a more humorous line, saying he wanted everyone to know that "after careful consideration, I decided I am going with Trump, which is why I am saying we should get rid of all Hispanic and Muslim actors."
Jeb!
The politically charged show also featured a surprise cameo from ex-presidential hopeful Jeb Bush, who appeared as a limo driver in a pre-taped sketch segment, asking Kimmel what it's like to be nominated.
Bush's brief appearance came at the end of a skit parodying several Emmy-nominated shows including Modern Family, Veep and The People v. O.J. Simpson: American Crime Story.
Bush appeared in the vignette as a limo driver hailed by Kimmel as he frantically sought a ride to the annual television awards show in downtown Los Angeles.
"I'm in between jobs right now," says Bush, sporting a cap. "You know you can make $12 an hour driving for Uber?"
He then asks Mr Kimmel what it's like to be nominated - a self-effacing nod to his failed bid for the Republican presidential nomination, which was eventually won by Trump.
Comedian John Oliver, who won an Emmy for outstanding variety series for Last Week Tonight, promoted humour in the current political climate as much-needed.
"Sometimes it can be a soothing balm on an open sore," he said.
On the other end of the political spectrum, Saturday Night Live star Kate McKinnon, who plays Clinton on the show, won the Emmy for best supporting actress in a comedy, and thanked the Democrat in her acceptance speech.
Clinton tweeted back:


Congratulations on your Emmy, Kate! Big fan of yours, too. pic.twitter.com/w00QO1GwyH