"Tom had his arm around her and held her close. Afterwards, Tom and Priyanka talked closely and were holding hands at one point for a few moments. Priyanka fixed Tom's bow-tie and then the two kissed on both cheeks," a source said 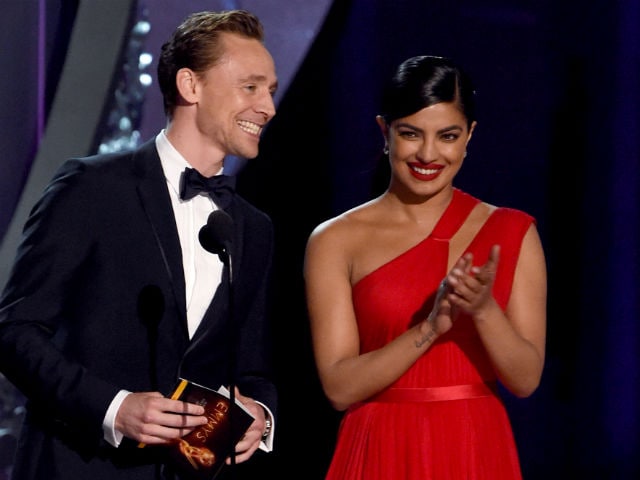 What began with a twirl for the cameras onstage at the Emmys reportedly progressed as did the night. Priyanka Chopra and Tom Hiddleston, who presented an award together at the Emmys in Los Angeles on Sunday night, spent the after party flirting with each other, reports E!Online.
Priyanka, 34, and Tom, 35, gave away the Outstanding Directing for a Limited Series, Movie, or Dramatic Special award to Tom's The Night Manager director Susanne Bier. Priyanka was at the Emmys courtesy her headlining role on network show Quantico.
Tom, who is never shy about a bit of public dancing, twirled Priyanka in her fabulous red Jason Wu gown as they walked to the microphone.

That much we know. And here's what happened at the post-show reception.
According to eyewitnesses present at the after-party, Priyanka and Tom were openly flirting in between taking selfies and circulating, reports eonline.com.
"Tom had his arm around her and held her close. Afterwards, Tom and Priyanka talked closely and were holding hands at one point for a few moments. Priyanka fixed Tom's bow-tie and then the two kissed on both cheeks," a source told E!Online.
The source also revealed that Priyanka and Tom gave each other their phones and keyed in their numbers before embracing.
"Priyanka and Tom said goodbye and she told him that she will see him later. They left the event about a minute after each other," the source added.
Tom Hiddleston is, of course, a single man now, after the death of his three-month romance with singer Taylor Swift, which was as public as it was brief and also viewed with heavy suspicion by fans. It may or may not have been a publicity stunt but there's no doubt that Hiddleswift is good and over, leaving the way clear for - HiddleChopra? PriyaTom?
Twitter is divided over the possibility of a romance.
Some made the case for:


Tom Hiddleston and Priyanka Chopra!??? I am here for this


Tom H and publicity machine needs to stay away from Priyanka Chopra. God! How thirsty is he?!

Priyanka Chopra was recently named the eighth highest paid TV actress by Forbes and will make her Hollywood debut in Baywatch opposite Dwayne 'The Rock' Johnson next year.
Meanwhile, here's a picture of Priyanka and Tom backstage at the Emmys.