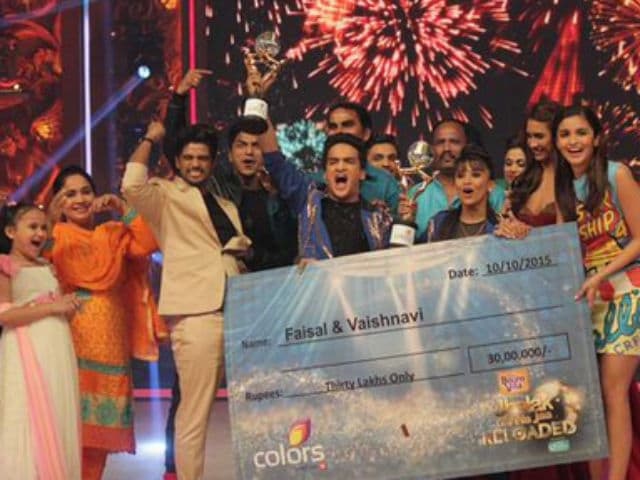 This image was posted on Twitter by Jhalak Dikhhla Jaa.

Faisal shot to fame after winning the show Dance India Dance Li'l Masters in 2012. He became equally popular for his role in the TV show Bharat Ka Veer Putra - Maharana Pratap, in which he played the young Maharana Pratap

There was music, dance and a dose of glamour at the finale of Jhalak Dikhhla Jaa Reloaded as Faisal Khan emerged as the first child artiste to win the trophy.
Faisal shot to fame after winning the show Dance India Dance Li'l Masters in 2012. He became equally popular for his role in the TV show Bharat Ka Veer Putra - Maharana Pratap, in which he played the young Maharana Pratap.
Along with the trophy, Faisal was also awarded with a car and a cash prize. Faisal became emotional after his name was announced and his family gathered on the stage to congratulate him. (Also Read: Leaked Picture of Jhalak Finale Goes Viral. Click Here For Winner)
Jhalak Dikhhla Jaa Reloaded was judged by Bollywood actor Shahid Kapoor, and former contestant Lauren Gottlieb and choreographer Ganesh Hegde.
Filmmaker Karan Johar was the only judge to join the new panel from the previous seasons, though he had to leave it halfway. He was replaced by actress Malaika Arora Khan.
Alia Bhatt also attended the show to promote her upcoming film Shaandaar, co-starring Shahid.
Faisal's finale act on Hairat Hai Raat impressed everybody. Judges as well as the audience gave him a standing ovation. Lauding his talent, Shahid thanked the people behind the show for showing him "such outstanding talent."
Alia also confessed that Faisal was her favourite and that she had even voted for him.
The cast of television show Comedy Nights Bachao including Krushna Abhishek, Bharti Singh, Karan Wahi and Anita Hassanandani also attended the finale.
Contestants such as Raftaar and Neha Marda, who were eliminated earlier, danced with Ganesh Hegde on songs like Chura ke dil mera, Piya tu ab toh aaja and Zinda.
Shahid and Alia also danced on the title track of Shaandaar. Shamita's family including elder sister Shilpa Shetty Kundra, also attended the finale to cheer for her.