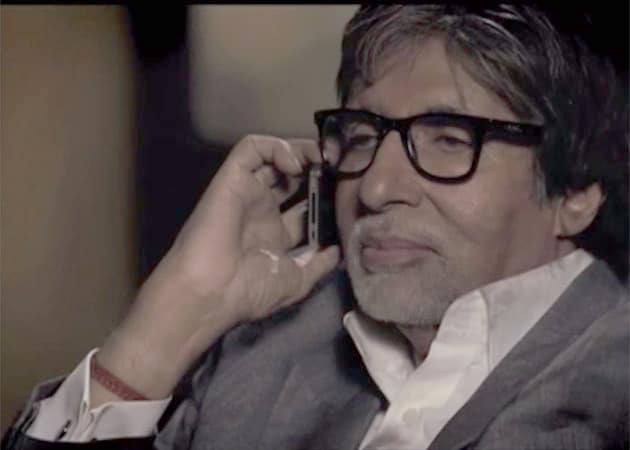 Big B in a still from Yudh

Bollywood's favourite film star Amitabh Bachchan appears on Indian screens on Monday in his first television drama series, in which he plays a real estate businessman with a potentially terminal illness.

Bollywood's favourite film star Amitabh Bachchan appeared on Indian screens on Monday in his first television drama series, in which he plays a real estate businessman with a potentially terminal illness. (Also Read - Revealed: Amitabh Bachchan has Two Wives in Yudh)
After more than four decades in cinema and nearly 200 film appearances to his name, the 71-year-old widely known as "the Big B" made his TV fiction debut with the lead role in the 20-episode show Yudh.
"For quite some time I wanted to get an opportunity on television in which I get to work in a serial," Mr Bachchan told the Press Trust of India news agency last month.
"Television is a very powerful medium. Commercially the turnover of television is three times more than that of films. It means that more people watch TV than films," he said.
"It is not about coming down to TV or going up to films. I think it is a healthy interchange of talent."
Mr Bachchan's television experience thus far has included hosting the game show Kaun Banega Crorepati, the Indian version of Who Wants to Be a Millionaire?, and one season of reality show Bigg Boss, the equivalent of Big Brother.
In Yudh, he plays businessman Yudhisthir Sikarwar who has been diagnosed with a neuropsychological disorder and is contending with complicated family issues as well as battles with his corporate rivals.
Some online reports have suggested the show was inspired by the hit US series Breaking Bad.
Mr Bachchan made his name as the "angry young man" of Hindi cinema and his most popular films include the 1970s hits Sholay, Deewaar and Don.
Still acting in several films a year and countless advertisements, he was voted "actor of the millennium" in a BBC online poll in 1999 and became the first Indian actor to gain a lookalike at London's Madame Tussauds waxworks museum.
He made his Hollywood debut with a small appearance last year in director Baz Luhrmann's adaptation of the classic 1925 novel The Great Gatsby.
After fellow film star Anil Kapoor made a successful transition to TV with the Indian version of 24 last year, the team behind Yudh hopes the show will raise the bar again for Indian TV, which has so far been dominated by family soap operas.