Game of Thrones: How Women Are Taking Control 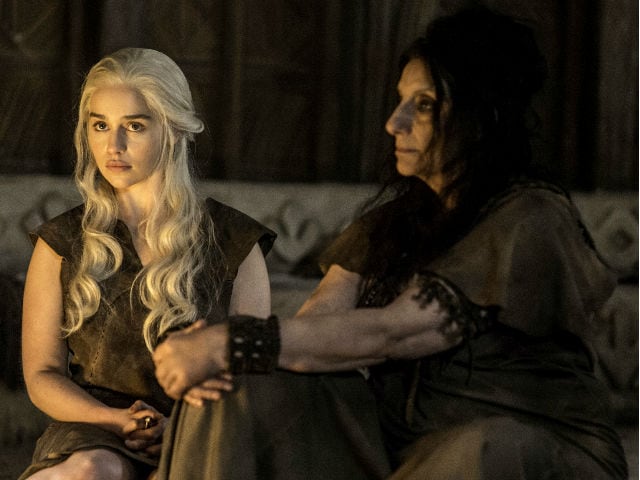 Emilia Clarke as Daenerys Targaryen and Souad Faress as the High Priestess of the Dosh Khaleen in Game of Thrones. (Image courtesy: Helen Sloan)

More often than not, ladies are beaten, imprisoned, raped and tormented. But things are changing this season. Suddenly, women have agency and they're wielding their newfound power overtly. They're getting aggressive - seizing control and waging war

The citizens of Westeros and Essos all suffer, but women get especially harsh treatment. Men pull the strings, while female characters get to be arm candy - if they're lucky. More often than not, ladies are beaten, imprisoned, raped and tormented.
And when they get into a bind, it's always a guy who bails them out. Even the all-powerful Amazon-like warrior Brienne of Tarth needed the help of a knight in shining armor at one point, and Jaime Lannister answered the call.
But things are changing this season. Suddenly, women have agency and they're wielding their newfound power overtly. They're not just behind-the-scenes puppetmasters, as they've been at times in past seasons. They're getting aggressive - seizing control and waging war. Meanwhile, men have turned meeker. Theon has sworn his allegiance to his sister Yara; the Sand Snakes have overthrown the current regime by murdering Doran Martell; and, most startlingly, Jon Snow is ready to give up, while Sansa prepares for battle.
"I'm tired of fighting," he tells her. "I fought and I lost."
But she won't be deterred. "I'll do it myself if I have to," she responds. She may have been brutalized, but she's far from broken.
The trend was especially clear in episode four, "Book of the Stranger." Here's a look.
At Castle Black
For a moment, it seems like Sansa needs Jon. Their reunion is emotional, and the relief on her face when she finally sees someone she can trust is a comfort not just to her but to an audience that has watched her endure one worst-case scenario after another.
"Where will you go?" she asks him after they take a sweet jaunt down memory lane. "Where will we go?" he responds, reassuringly. But her pleasure is short-lived. Once it's clear that Jon has lost his taste for fighting -- he did just hang a kid, after all - Sansa has to make it explicitly clear that she's going to try to retake Winterfell with or without him.
Later, when he receives a letter addressed to "the bastard Jon Snow" from the new lord of Winterfell, he can't even read it. Is he trying to protect Sansa or himself? Either way, Sansa isn't having it. She snatches the letter from him and finishes reading it aloud so that everyone can fully appreciate the stakes. And only then does Jon understand the gravity of the situation. A sadistic miscreant is in control of his rightful home.
Meanwhile, Brienne is also gaining notice (and not just from Tormund, who apparently has a thing for tall women). She makes it abundantly clear to Ser Davos and another powerful woman, Melisandre, that she was the one who executed Stannis; she's never been one to tiptoe around the truth. She also communicates that she's hardly forgotten who was responsible for delivering that deadly shadow baby to Renly's camp. It's hard to say what she'll do next, but she's proving that she isn't afraid of a little magic, even though she knows what it can do.
On the Iron Islands
Since it's a man's world, Theon would be the most likely successor to the throne after his father Balon died. And his sister can only assume that's why Theon has shown up out of the blue to the Iron Islands. But he's in no shape to rule. He's a broken man and doesn't fight back when Yara starts bullying him. Instead he pledges his loyalty.
"You should rule the Iron Islands," he tells her. "Let me help you."
What Theon can do to help in this state is a mystery, but at least he knows better than to fight back.
At King's Landing
While Loras is falling apart, desperate to get out of the Faith Militant's prison, Margaery is holding it together remarkably well. She even puts on a show with the High Sparrow, making it seem like she's buying what he's selling. "You need to stay strong," Margaery tells Loras later, but it doesn't seem like he's really listening.
Meanwhile, on the other side of town, King Tommen is nearly as inconsolable. In this case, Cersei is there to pick up the pieces. It hasn't been long since she was publicly humiliated, but she's already plotting her comeback. She and Jaime go to see the members of the Small Council and explain that Margaery could soon end up doing the same naked march through town.
Olenna gets it. "That can't happen," she says. Cersei agrees and they hatch a plan to have the Tyrell army attack the Faith Militant and rescue the queen. Kevan Lannister is the only one who doesn't think fighting is the right course. But the women set him straight.
At Vaes Dothrak
The Mother of Dragons is back. In one episode, Daenerys transformed herself from a prisoner with a precarious future to the leader of the Dothraki. All she had to do was walk through fire.
You could argue that Daario and Jorah rescued her, but really the plan was all hers. And it was certainly better than their plot to spirit her out of the city. They were just her accessories. She was the mastermind.
At Winterfell
Osha never had a chance. That much is certain, given all the intel Theon/Reek gave Ramsay. For a moment, it seemed like she might get the better of the new Lord of Winterfell, what with her fearlessness -- the same thing that appealed to him about Myranda -- and her seduction skills. But it wasn't to be. Ramsay stabbed her in the neck.
At least her end was quick. And at least she went out fighting.
©2016, The Washington Post