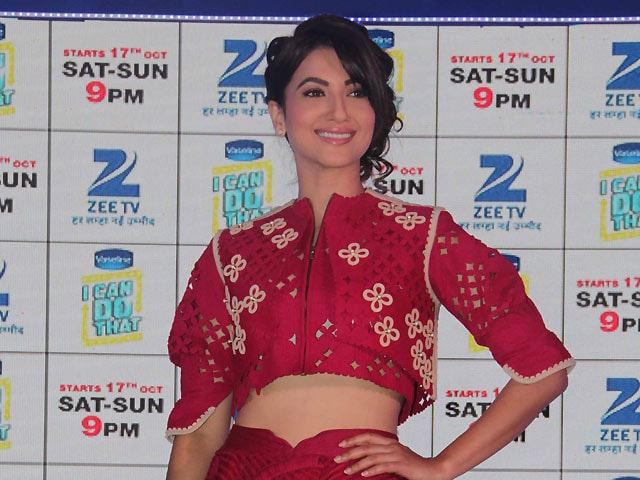 Gauahar Khan at an event in Mumbai.

"I don't know why everybody looks down upon television. Television is the most respected industry worldwide. I don't know why only in India it is underestimated," said Gauahar Khan, who will be seen as a contestant on TV show I Can Do That. Gauahar was the winner of TV reality show Bigg Boss 7

Actress Gauahar Khan, winner of Bigg Boss 7, feels despite being the "most respected industry worldwide", the television medium is "looked down upon" and "underestimated" in India. She is also known for her participation in reality shows like Jhalak Dikhhla Jaa and Khatron Ke Khiladi.
"I don't know why everybody looks down upon television. Television is the most respected industry worldwide. I don't know why only in India it is underestimated," said Gauahar, who will be seen as a contestant on TV show I Can Do That, which will be hosted by Farhan Akhtar.
"The love, fame, appreciation and everything that I have today, it's because of television. So if I'm ever going to put my back on it and say that I'm getting film offers, it won't work. I don't think anyone has tapped the reality show industry as much as I have, and I really enjoy that space. So it is my work and I respect it," she added. (Also Read: Gauahar Khan Wants to do 'Selective Work')
Gauahar, who has featured in small roles in films like Ishaqzaade and Once Upon a Time in Mumbaai, feels that doing reality shows "connects" her directly with my fans as the format has a "big space".
"The fans don't get to see you as some character but they see the real Gauahar Khan as the way I am," she said.
Of why she agreed to participate in I Can Do That, Gauahar said: "This show is not about acting and dancing. I Can Do That is a skill-based show. It is something that I never thought in my dreams to do. The best part of it is that even though you are scared of stunts, but after doing them you feel happy when the audience get entertained and claps for you."
I Can Do That, slated to be aired on Zee TV starting October 17, will also feature celebrities across different fields to step out of their comfort zone and perform various tasks that they have never tried in their life. (Also Read: Would Love to Make a Fiction Show For Television, Says Farhan)
Has she witnessed any change in herself since being a part of I Can Do That? Gauahar said: "I'm amazed with myself. I really underestimate myself about things I can do and I am capable of doing. So, I'm proud of myself after shooting for the show. I'm not that much of a coward that I feel I am, but I'm happy and excited about doing it."
She said that such shows encourage her to face, if not overcome, her fears even if it's "just that for that moment".
Is there anything that she thinks she can't do?
"I can't do bungee jump and skydiving. These are two things that I cannot do," said Gauahar.
Apart from Gauahar, I Can Do That will also feature Dino Morea, Gurmeet Choudhary, Mandira Bedi, Rithvik Dhanjani, Shibani Dandekar and Meiyang Chang.
On the big screen, Gauahar will next be seen in a song for the upcoming film Kya Kool Hain Hum 3.
"I've just finished this song and I'm very excited about that. It's going to be releasing in a month. The song is for Kya Kool Hain Hum 3. It's a really cool song," she said.