In Game of Thrones, It's Time to Start Rooting for the White Walkers 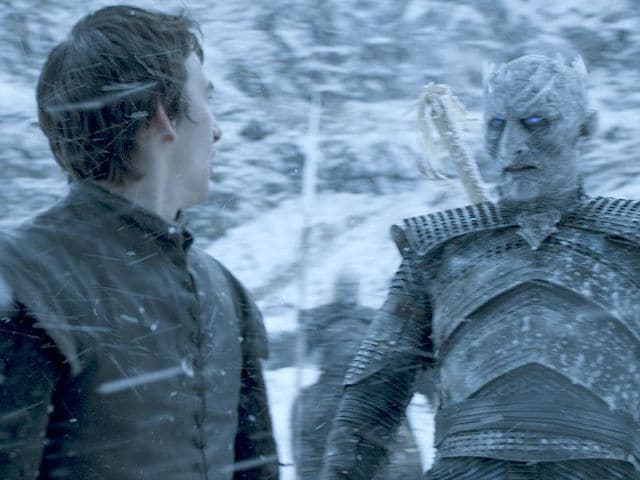 Westeros is desperate for change: Wracked by war for generations and faced with nothing but sociopaths on all sides, it's time for a change. Westeros needs a man who is more than a man to sit on the Iron Throne. Who better than the Night King to make Westeros great again?

Last year, I joked that the darkest way that George RR Martin and HBO could end Game of Thrones would be to put a White Walker on the Iron Throne. But after a few minutes of thought, I realized that, given the options, this was actually a best-case scenario for Westeros. And nothing I've seen thus far this season - including and especially Sunday's revelation of the origin of the White Walkers - has dispelled that notion.
It turns out that the White Walkers were first brought into existence by the Children of the Forest, a race of magical beings who were being hunted to extermination by the First Men. Their magical trees felled, their bodies destroyed, the Children turned one of the First Men into a magical ice zombie in order to drive back the hordes who were decimating the Children's homeland.
The White Walkers, then, are revenge for man's hubris and cruelty, a way to check his onslaught against nature. And yes, they are cunning and vicious warriors. In the very first episode of Game of Thrones, we see some of their gruesome handiwork; that threat of magical violence is the shroud under which the entire series has existed thus far. But you could argue that the White Walkers are actually the most decent creatures we've seen thus far.
The White Walkers are, ultimately, in favor of life, at least as they have come to understand it. Sure, they kill their enemies. But they also resurrect them, provide them protection and meaning, with neither sustenance nor suffering a concern any longer. Free will is overrated; just look at Westeros as we know it.
Think about the White Walkers' treatment of the boys of Craster, the cruel wildling lord who killed all of his incestuous male children to avoid siring a challenger. Audiences assumed Craster was giving the boys up to be eaten or dismembered or made part of some evil ceremony. Instead, we see a White Walker lord gently cradling the baby, taking him to his ice castle. There, the Walkers do not feast upon his entrails or sacrifice him. No, they make him one of their own. They bring him into the fold.
Compare that behavior with what we've seen from literally every other house on Game of Thrones. Robert Baratheon (Mark Addy) orders the murder of the children of the previous occupant of the Iron Throne. Following King Robert's death, the golden-haired Lannisters, two of whom started the show by attempting to murder a child, viciously kill all of Robert's bastards - including a newborn housed in a brothel - in order to cement their hold on power.
Dorne is now in the hands of a group of women who kill the children of their enemies in order to maintain power and obtain revenge for past wrongs.
The current warden of the north, Ramsay Bolton (Iwan Rheon), gets his jollies by feeding newborns (and their mothers!) to dogs.
The Starks seem honorable enough, though poor Hodor (Kristian Nairn) might disagree, given Bran's (Isaac Hempstead Wright) unintentional destruction of the young Willis' mind. And earlier this season, one of Bran's visions showed the young Ned Stark winning a victory on decidedly unchivalric terms.
And what of the so-called Mother of Dragons, one Daenerys Targaryen (Emilia Clarke)? Well, she did sacrifice her unborn child in a futile attempt to save the life of her husband. Since then, she has engaged in a series of costly and poorly thought-through wars that have led to thousands of deaths and endless sectarian violence in her ungovernable - but "free" - city-states. Not content to simply sow chaos, Dany has unleashed winged weapons of mass destruction against her enemies, uncontrollable beasts that have burned to death small children.
Oh, she also recently burned a bunch of political leaders to death in a holy site in order to terrorize their populace into bending its collective knee to her.
Look, the White Walkers aren't perfect. I'll be the first to admit that. But Westeros is desperate for change: Wracked by war for generations and faced with nothing but sociopaths on all sides, it's time for a change. Westeros needs a man who is more than a man to sit on the Iron Throne, a man who was altered in order to stop man's wanton brutality, his senseless violence.
Who better than the Night King to make Westeros great again?
(This story has not been edited by NDTV staff and is auto-generated from a syndicated feed.)