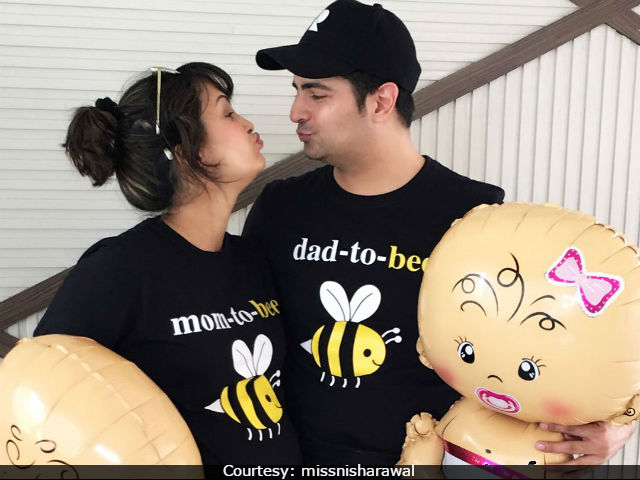 Television actor Karan Mehra, best known for his role in Yeh Rishta Kya Kehlata Hai, hosted a baby shower for wife Nisha Rawal, who is expecting the couple's first child. The baby shower was attended by Karan and Nisha's close friends including fashion designer Rohit Verma. The couple was colour-coordinated and looked adorable. "We already feel so blessed and excited for this new adventure that's about to begin, looking forward to welcoming our little baby to the world. Thank you each and every one for coming and making this day more special," Karan captioned his post on Instagram. Karan announced Nisha's pregnancy on social media in January this year.
Here are some pictures from the baby shower.


We already feel so blessed and excited for this new adventure that's about to begin, looking forward to welcoming our little baby to the world. Thank you each and everyone for coming and making this day more special.

Aren't the pictures cute?
Karan, 34 and Nisha, 32, started their career as models. The couple married in 2012 after a courtship of six years.
Here's how Karan and Nisha announced pregnancy:


With the grace of God we have been able to achieve many things in life but creation of life itself is an overwhelming feeling. Here's to the beginning of another beautiful story...our pregnancy

Here's putting all speculations about my weight gain to rest: Yes our 1st baby is on the way & we are on our way to bringing a new life on this planet, need all your good wishes P.S.: I hope the privacy of my pregnancy journey will be respected and I won't be asked over n over again to make posts on the same and shall be given space to post at will.

Karan Mehra was last seen in the reality show Bigg Boss Season 10, which was hosted by Salman Khan. He was the first celebrity guest to get evicted. Karan gained popularity after featuring as Naitik in Yeh Rishta Kya Kehlata Hai, opposite Hina Khan. Karan quit the show last year due to health reasons. He featured in the show for six years and had won many awards for his role.
Karan and Nisha have together appeared on the couple dance reality show Nach Baliye 5. Meanhwhile, Nisha last featured in Main Lakshmi Tere Aangan Ki. She has also been a part of Sonu Nigam's popular album Chanda Ki Doli.
Karan is now judging The India Dance Week, a dance festival, hosted by choreographer Sandip Soparrkar.