Shivaay gives Tia's necklace to Romi, asks her to give him the chip in return 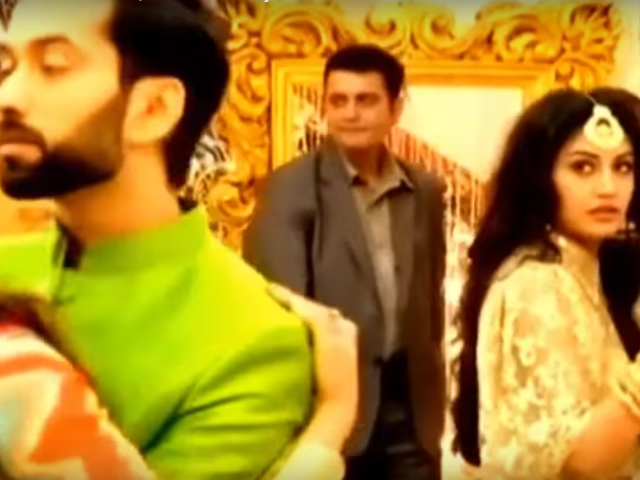 A still from Ishqbaaz

The Ishqbaaz episode on February 24 opened with Shivaay dancing with Tia in an attempt to make Anika jealous. Meanwhile, Anika too starts dancing with a man. During the dance, Shivaay slyly takes Tia's necklace and puts it in his pocket. As the dance continues, the dance partners are swapped and Shivaay gets a chance to dance with Anika. He questions her about the guy she was dancing with. Anika asks Shivaay why her dancing with someone else was bothering him. As the music stops, Shivaay walks away from the dance floor. He goes near the drinks area and places Tia's necklace in a wine glass. Romi, who is disguised as a waiter takes the tray with the wine glass away. Shivaay calls her up and asks her about the chip she was supposed to give him.
Anika finds Tia's necklace missing and asks her how she misplaced it. Everyone panics on seeing the necklace missing. Shivaay's mother asks the security guards to search every staff member including Anika. However, daadi doesn't approve a check on Anika. Anika also denies stealing the necklace. Meanwhile, Shivaay gets a call from Romi asking him to stop the search else his wife, Anika would be the one to get into trouble. Shivaay gets worried and distracts everyone by breaking a vase placed on the table near him. He takes out the necklace from Anika's pouch and throws it away on the ground. Shivaay then points out towards the necklace and says Tia must have dropped it while dancing. He orders the guards to call off the search. Tia asks Shivaay to return the necklace to her but he refuses. He says that he would keep it in the safe so that everyone could enjoy the function without any worry.
Shivaay again tries to give the necklace to Romi by putting it back in the wine glass. This time she manages to take it. However, Tia's mother tells Shivaay that she knows what he is up to and that he can't fool her. She asks him to return the necklace to Tia, threatens him that she will show the video to everyone, however, Shivaay laughs it off and says that he finds her repeated threats a joke now.
Tia's mother tells Svetlana about Shivaay's plans to get hold of the video. She tells her that he wouldn't be successful as the chip was hidden in her wrist watch. She finds the chip missing as she takes off her wrist watch to show Svetlana. In the last segment of the show, Shivaay is seen following Romi in order to acquire the chip from her. However, Tia's mother and Svetlana capture Romi and make her unconscious. On seeing Shivaay enter the dark room, they push Romi under the bed and hide. Shivaay finds Romi missing and wonders where she disappeared after entering the room.