Jennifer Aniston says social media, specifically the world's dependence on it, is what is preventing a F.R.I.E.N.D.S reunion movie from happening 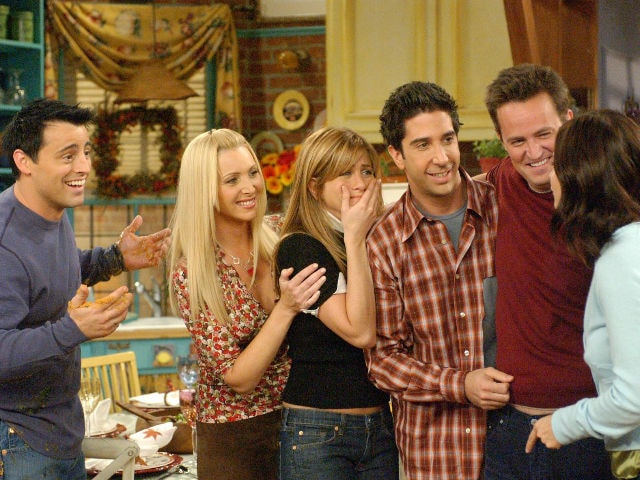 Blame Facebook and Instagram for the persistent F.R.I.E.N.D.S-shaped hole in our lives. Jennifer Aniston just told Digital Spy, that social media, specifically the world's dependence on it, is what is preventing a F.R.I.E.N.D.S reunion movie from happening. Fans have been clamouring for a film version of the blockbuster TV show that ran from 1994 till 2004. Jennifer Aniston, who played Rachel Green, told Digital Spy, "There was something about a time when our faces weren't shoved into cellphones and we weren't checking Facebook and Instagram. We were in a room together, or in a coffee shop together and we've lost that." A rather depressing truth.
I don't know what we would do, I think that period of time was sort of nostalgic, you know, there's something about a time, and I think why people have such an affection for it," said Jen, 47, about why F.R.I.E.N.D.S is still so beloved and how difficult it would be to recreate the series' original spirit now.
In June, F.R.I.E.N.D.S co-creator Marta Kauffman also ruled out the possibility of an update of the series. "F.R.I.E.N.D.S was a show about that time in your life when your friends are your family, and in a weird way, this isn't that different. Once you start having family of your own it changes, and the show was over. A show has a lifespan I believe, it has a lifespan like anything else, and there's no reason to continue doing it just because people miss the characters," she told deadline.com.
A pale version of a F.R.I.E.N.D.S cast reunion did take place earlier this year, when five of the six principal actors appeared on a special show to celebrate director James Burrows' 1,000th TV episode. Mr Burrows helmed the pilot episode of F.R.I.E.N.D.S. Jennifer Aniston, Courteney Cox, Lisa Kudrow, David Schwimmer and Matt LeBlanc appeared on the James Burrows special. Matthew Perry, Chandler Bing from F.R.I.E.N.D.S, was in London starring in a play.