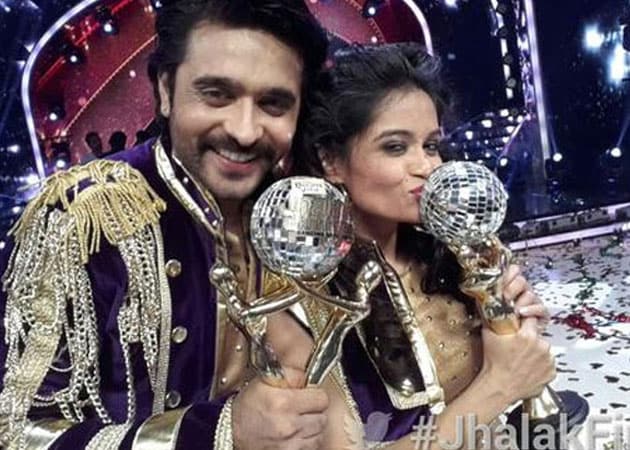 The actor says this is for the first time he made his wife cry.

Actress Archana Taide was so overwhelmed with emotion when her husband Ashish Sharma lifted the winners trophy at the grand finale of Jhalak Dikhhla Jaa 7 that she broke into tears. The actor says this is for the first time he made his wife cry.

"My mom flew in from Jaipur specially for the finale and my wife was also there. They broke down when my name was announced. This is the first time I've made my wife cry," said Ashish, who won prize money of Rs 30 lakh and a Mahindra XUV along with the trophy.

"But on a more serious note, it was one of the most emotional moments in my life. I have to confess I nearly broke down myself," he added.

"This journey from non-dancer to dancer has given me a lot of self-confidence and inner strength. I feel like a different person," he said.

"When I came on the show, I never expected to go through the experiences that I did. Now I feel these experiences have enriched my life beyond recognition," he added.

However, right now he is planning a long holiday and after that he will take up new assignments.

His wish list includes movie projects too, but he has no intention of alienating himself from television.

"Of course, I want to do films. But to me television is equally important. It is where I got recognition," he said.

Most of the small-screen shows are female centric, but Ashish was lucky that in both Gunahon Ka Devta and Rangrasiya he was central to the story.

"When I came into television, the serials were all women-centric while the men had to stand around like furniture. I wasn't willing to be a prop in serials. To my good fortune, I got serials where I was a central character," he said.

Ashish hopes to go back to television as a better actor.

" Jhalak Dikhhla Jaa has helped me shed my inhibitions. Dancing in front of an audience was not easy for me. But I managed it and got progressively comfortable with the audience as the weeks progressed," he said.

"I am never comfortable in one space. I am very restless. I went into Jhalak to dance. I am now an actor-dancer. I am already thinking of what else I can be," said Ashish.